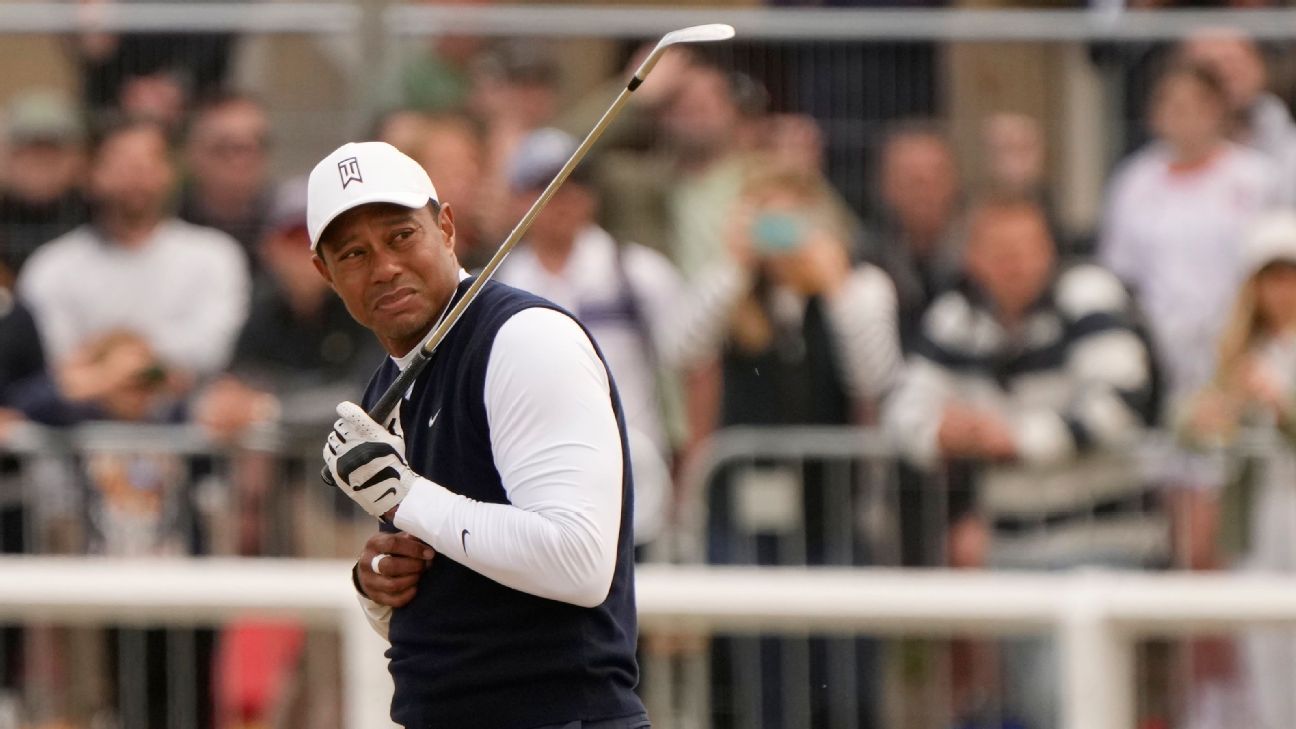 St. Andrews, Scotland — The first time we saw Tiger Woods smile during his first round of The Open on Thursday was on the ninth green of the Old Course.

It followed a successful birdie putt and a rare moment where mind and body worked in harmony. The sight of that smile gave encouragement to those watching that perhaps there was still hope of him finding another miracle from within, as he struggled to manage the wind, speed and intricacies of the course.

There were moments where he still stunned; those glimpses of what made Woods one of the finest players we’ve ever seen. But dotted throughout this 6-over 78 — a score which tied his worst round at St. Andrews in an Open since 1995 — were reminders of where he is now in life and in his career.

As you saw him limping round the course, attempting to roll back the years, there was a feeling you simply had to soak it all while you could to prepare yourself for the day he can no longer hold back the tide.

There were echoes of Woods’ past everywhere around the Old Course this week, a gloriously optimistic concoction of nostalgia and expectation. The likes of Justin Thomas and Rory McIlroy had spoken glowingly of how well Woods was hitting the ball. But when his second shot of the round found the Swilcan Burn and we walked to the second already 2 over on the day, it was as if the sky had clouded over.

The play dragged. Woods’ group frequently had to wait at the tee for the green to clear, leading to a 6-hour, 5-minute round.

“That was about the only good thing of it taking so long is that you get extra time out there with him,” said Matt Fitzpatrick, who was grouped with Woods and Max Homa.

So by the time Woods approached the ninth tee at 6 over, the expectation from those watching had shifted from hoping to witness the vintage Woods to pleading for him to one small piece of magic for the highlight reel. Something to cling on to, to tell whomever they’re closest to that they saw Tiger do that. Two birdies followed, and the cheers got louder. We saw him smiling. But then, on the 11th, he missed a 6-footer and that uneasy feeling returned. You saw Woods crisscross the fairways, finding himself in areas of the course that back in 2000 and 2005 he danced around.

“It feels like I didn’t really hit it that bad,” Woods said. “Yes, I did have bad speed on the greens. But I didn’t really feel like I hit it that bad, but I ended up in bad spots. Or just had some weird things happen. And just the way it goes. Links is like that. And this golf course is like that. And as I said, I had my chances to turn it around and get it rolling the right way and I didn’t do it.”

Regardless of how this day went, his star power remains inescapable. It felt as if most of the 52,000-strong crowd had gravitated near the R&A Clubhouse to watch that grouping of Woods, Homa and Fitzpatrick tee off at 9:59 a.m ET. One spectator had dyed their hair into a tiger pattern. Even royalty struggled to get a decent view of Woods teeing off — with Prince Albert II of Monaco unable to find his way through the throng to catch a glimpse. It wasn’t a case of mere standing room only — it was tip-toes at best, with some resorting to watching it through the zoom on the phone raised in front of them. Once Woods teed off, some moved on, but returned when they remembered that next up was home hope Matt Fitzpatrick, who won the U.S. Open under a month ago.

“I didn’t realize how many people were there until when Tiger got announced on No. 1, it was like a sea of people around us,” Homa said. “Then all of a sudden, I was, like, holy cow. So I was very nervous. The whole first hole, I was kind of having like an out-of-body experience.”

For Homa it was the realization of a childhood dream.

“It was the coolest frickin’ day I’ve ever had on a golf course,” Homa said. “He’s the GOAT for a reason. He was very, very nice. It was a really fun day. It was a dream-come-true type day minus some of the golf. It really felt like fantasy.”

As Woods moved down the first tee, it felt like the whole of St. Andrews migrated with him. He was in the fairway — so far, so good. But then the unravelling began. The ball had found a divot, Woods mishit his second shot, and the ball dribbled into the water.

He walked to the second looking slightly bemused. A loan voice called out “Oh! GOAT!” as he launched his tee shot into the wind, but Woods face stayed granite still, unmoved. That stare grew over more intense as the round continued to unravel. And he had plenty of time to think — it was an hour between them starting and teeing off on the fourth. By the fifth, as Fitzpatrick and Homa exchanged a joke as they waited again for the fairway to clear, Woods was removed, standing at the back in silence.

McIlroy said this year’s tournament would be like playing chess. But by the eighth, Woods must’ve felt like he’d been facing a Grand Master without half his pieces. That run he had back in 2000 was famous for so many reasons. He won by eight shots. He carded just three bogeys over the 72 holes. He dodged every single one of the 112 bunkers on the Old Course.

But 22 years later, he needed just seven holes to find one of those bunkers. Not yet at the turn, it was already his second double bogey.

By the eighth the cheers were muted. Instead it was lone voices cajoling him on. One simply said “smile” as Woods approached the tee. And then came the brief recovery across the ninth and 10th, His back-to-back birdies answered their plea. But by the 11th we were back to watching him struggle on the course he loves so much. The interactions with those around him were minimal. He let little emotion slip, other than the odd rueful shake of the head, or a resigned smile on the 13th as he three-putted. It was one which said when it isn’t your day, it really isn’t your day.

“In a round sometimes it just goes that way,” Woods said. “It just goes one way and it never seems to come back. No matter how hard you fight.”

The score will be forgotten, a footnote of a brilliant career. But this occasion was a milestone for him on a personal level. He’d made it to St. Andrews.

Throughout his rehabilitation after his car accident in February 2021, he had this event circled. He wanted desperately to have one more crack at taming the old place. And that thought got him here to the first tee on Thursday, which was remarkable given the severity of the injuries he suffered last year and all the other injuries and surgeries that preceded it.

“[It was] very, very meaningful,” Woods said. “All things considered, where I’ve been, I was hoping I could play this event this year. Looking at it at the beginning of the year, end of last year when I was rehabbing, trying to see if I could do it, but somehow I was able to play two of the major championships in between then and now, which was great. But this was always on the calendar to hopefully be well enough to play it. And I am. And just didn’t do a very good job of it.”

Make your picks and compete for a chance to win $5,000! Make Your Picks

There were glimpses of the old Woods, like the birdie on the 14th after he launched his tee shot 412 yards, and his approach shot to the green on the 17th. But for those watching Woods up close for perhaps the first time in a long while, it felt like there was a recognition that whatever we previously took for granted when Woods approached a shot had shifted. No longer was the result guaranteed — the method and the look were the same, but the outcome was unpredictable.

St. Andrews and The Open has witnessed four different iterations of Tiger Woods. Back in 1995 we saw the young Woods taking on his first Open championship, as an amateur. By 2000 he’d already won two Majors and added his first Open with that remarkable display as he wiped the floor. He followed that up with another incredible win in 2005. But in 2015 when he missed the cut, seven years after his previous major triumph, this was the third stage of Woods as his powers waned.

Though he still has Friday to turn this around, this could yet be the fourth stage of Woods — the one post-car accident . The expectations had shifted and this was him proving to himself that he could still play the game he loves with the mind just as sharp, but with a body he’s still figuring out. This was the best he’d felt since he made his comeback, but that’s not enough for a champion. The disappointment was evident as he spoke afterwards.

For so long he has managed to work out how to better the Old Course, but on Thursday he couldn’t find the answers. Woods isn’t yet ready to gloss over this round with nostalgia. He’s not looking backward — not at this stage anyway, as he has a new goal: making the cut.

“Looks like I’m going to have to shoot 66 [on Friday] to have a chance,” Woods said. “So obviously it has been done. Guys did it [in the first round]. And that’s my responsibility [in the second round], to go ahead and do it. Need to do it.”