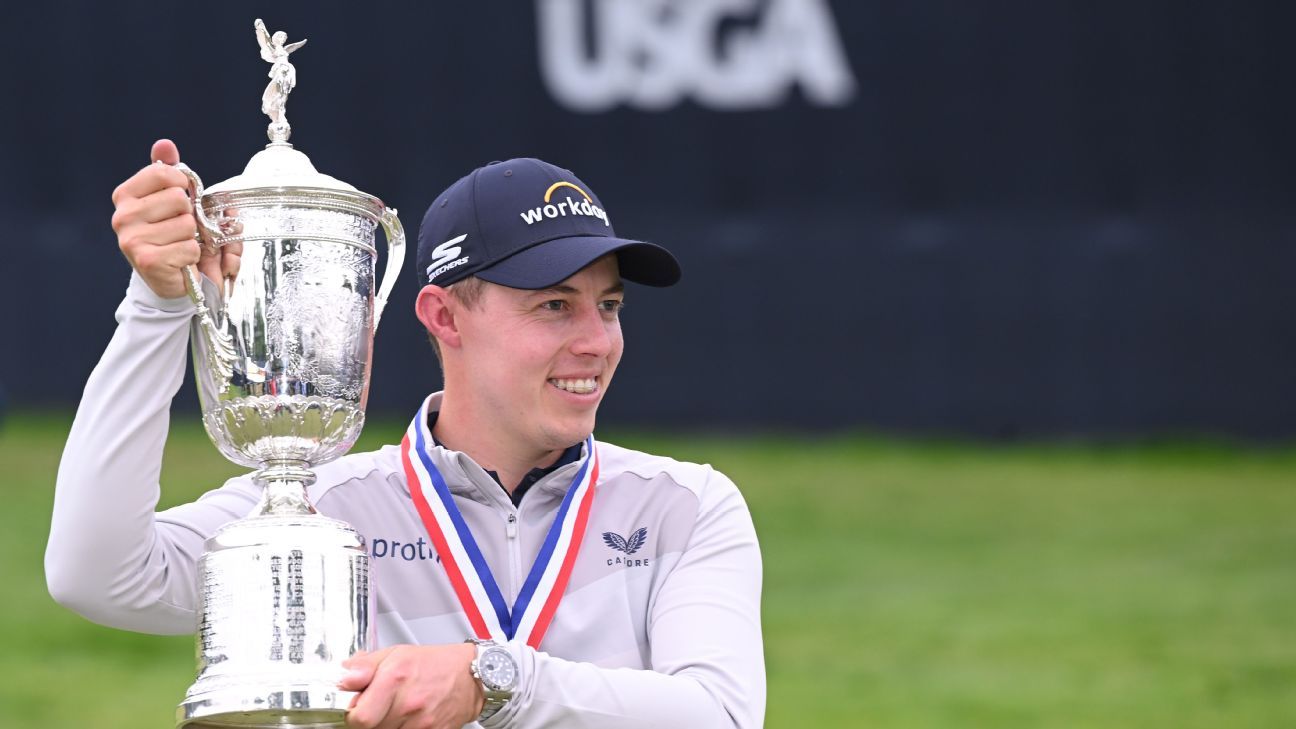 He and Fitzpatrick were walking toward their tee shots on the 18th hole of The Country Club. Madness was unspooling all around them. The U.S. Open was hanging in the balance. Thousands of rowdy fans had just spilled into the fairway, and now Boston police officers were trying — and failing — to keep the throngs behind the rope line. Fitzpatrick, clinging to a one-shot lead, tried to keep his head down as he navigated the fracas, but he still managed to get swallowed up by the crowd. It took three police officers to eventually clear a path for him.

Zalatoris marched on. Fitzpatrick’s tee shot was somewhere in the left fairway bunker, and Zalatoris wanted to know exactly what Fitzpatrick was facing with his approach. His own ball was in the fairway and he wasn’t sure if he needed a birdie or par to get into a playoff. What Zalatoris saw gave him a glimmer of hope. Fitzpatrick’s ball was nestled down in a shallow part of the bunker, partially blocked out by an island of rough. It would require a small miracle to get it on the green.

Suddenly, a par might get Zalatoris into a playoff. A birdie might win the tournament outright. A mixture of tension and apprehension and excitement swirled in the air.

Fitzpatrick, when he finally arrived at his ball, saw it similarly. This was, to put it bluntly, a moment. Whatever happened next might haunt him or fulfill him for years to come. He talked over his options with his caddie, Billy Foster. He pulled a 9-iron and aimed a hair to the left. It was time to trust everything that brought him to this moment.

He took a few deep breaths, waggled the club several times, then stepped into the shot. It all happened so quickly, the dense crowd was still murmuring, as if caught off guard, as Fitzpatrick pulled the club back. But the sound of the club as it connected with the ball rippled through the air like the crack of a whip.

Fitzpatrick watched as it climbed and knifed through the air, drifting gently to the right, then heard the roar when it tumbled out of the sky and nestled behind the pin. Zalatoris almost couldn’t believe it.

“To pull that off in that situation is incredible,” Zalatoris said. “When they show highlights in future U.S. Opens, that’s a shot that is going to be shown. Because that was just awesome.”

The U.S. Open wasn’t officially over until Zalatoris narrowly missed a birdie putt on 18, giving Fitzpatrick a chance to celebrate his first major. But the bunker shot is the one that will go down as a part of U.S. Open lore, a shot indicative of Fitzpatrick’s combination of grit and genius. He hit 17 of 18 greens during his final-round 68, something only Nick Faldo (1996 Masters) and Brooks Koepka (2017 U.S. Open) has pulled off in the past 30 years of majors.

Zalatoris and Scottie Scheffler threw haymakers at him all afternoon, each earning a share of the lead at one point, but Fitzpatrick — who grew up in Sheffield, a working-class steel town in England — withstood them all.

“It’s one of the best shots I’ve hit of all time,” Fitzpatrick said. “I’ll be honest, I’ve really struggled with fairway bunker shots all year. I’m a fast player, and when I look back on it, it all happened so fast. Natural ability just kind of took over. I just played the shot that was at hand. It came out as a kind of a squeezy fade. It was amazing.”

It would be a bit of stretch to think of the 27-year-old Fitzpatrick as an underdog, even though his braces would help him pass as a teenager in most English secondary schools. He won the U.S. Amateur at The Country Club in 2013, has played on three Ryder Cup teams for Europe and won seven times on the European Tour.

But before Sunday, he’d never won on the PGA Tour and grabbed just two top 10s in major championships. He felt like the kind of golfer who would always be a prisoner to his own physical limitations, a bantamweight in the ring with middleweights and heavyweights. He could punch above his weight class, occasionally, but no one expected him to smash the ball off the tee.

But gradually, that’s exactly what started to happen, particularly this year. Fitzpatrick’s ball speed has been climbing steadily to where it’s now similar (175 mph) to Justin Thomas (176 mph) and Dustin Johnson (177 mph). On Sunday, he frequently outdrove Zalatoris, something he said gave him an added boost of confidence every time he walked to his ball.

“I don’t know if you guys have noticed, but I feel like [Fitzpatrick] has made some extreme improvements off the tee in a matter of months,” Scheffler said. “I played with him in Austin this year and he was not hitting it nearly as far as he is now. I don’t know what he’s doing. Maybe he’s on the ‘Bryson Program’ or something. He’s hitting it really well. He definitely deserved to win this golf tournament.”

Michael Collins is back for an all-new season of America’s Caddie. He’ll take you inside the world of golf with exclusive looks at some of the top courses, feature stories, celebrity guests and interviews with the biggest stars in golf. Stream on ESPN+

Fitzpatrick chuckled when informed of Scheffler’s comments and couldn’t resist taking what seemed like a little dig at Bryson DeCheambeau.

“I’ve just been drug tested and it came back negative,” Fitzpatrick quipped.

Fitzpatrick did reveal that since 2020, he’d been working hard with his team, trying to get stronger and faster. Some of his progress was derailed by injuries, but recently things have truly started to click.

“I’ll be honest, it’s worked wonders,” Fitzpatrick said. “Maybe three years ago, if I was in this position and I was playing with Will in the final group, I’d be concerned I was going to be 15 or 20 behind him all day. I felt comfortable knowing I was going to be past him, which obviously gave me confidence going into the next shot. When you’re hitting it past people, it’s obviously quite nice.”

The moment Fitzpatrick seized control of the tournament, however, turned out to be a combination of patience, brawn and a little luck. He and Zalatoris — tied for the lead at 5 under — had to wait for nearly 10 agonizing minutes on the 15th tee, a pause so significant Zalatoris started stretching like he was working his way through a beginner’s yoga class. When they were finally cleared to hit, Fitzpatrick blasted his drive well right of the fairway. Zalatoris hit a much better ball that looked like it would nestle in the short grass. But when they got to their tee shots, Zalatoris’s ball was buried in the rough; Fitzpatrick’s was sitting up cleanly, in an area trampled down by the crowd.

“I didn’t realize how far right it had gone,” Fitzpatrick said. “I should have shouted fore, so I hope it didn’t hit anyone there. But it’s funny, I feel like all year we’ve just had moments where we’ve just not caught a break. Not had a lie, not had a bounce, and this time I get there and the ball is sitting perfectly.”

Fitzpatrick ripped a towering 5-iron off that perfect lie from 220 yards out. He knew it was great, and it settled 18 feet from the hole.

“One of the best shots I hit all day,” he said.

Zalatoris made a bogey from the front bunker. Suddenly Fitzpatrick had a putt to take a two-shot lead with three holes to play.

He rolled it right in the heart of the cup.

He couldn’t resist following it up with a vicious fist pump. He’d long felt overlooked and dismissed in the world of golf, and now here it was, a major championship within his grasp. He marched to the next tee with a bounce in his step.