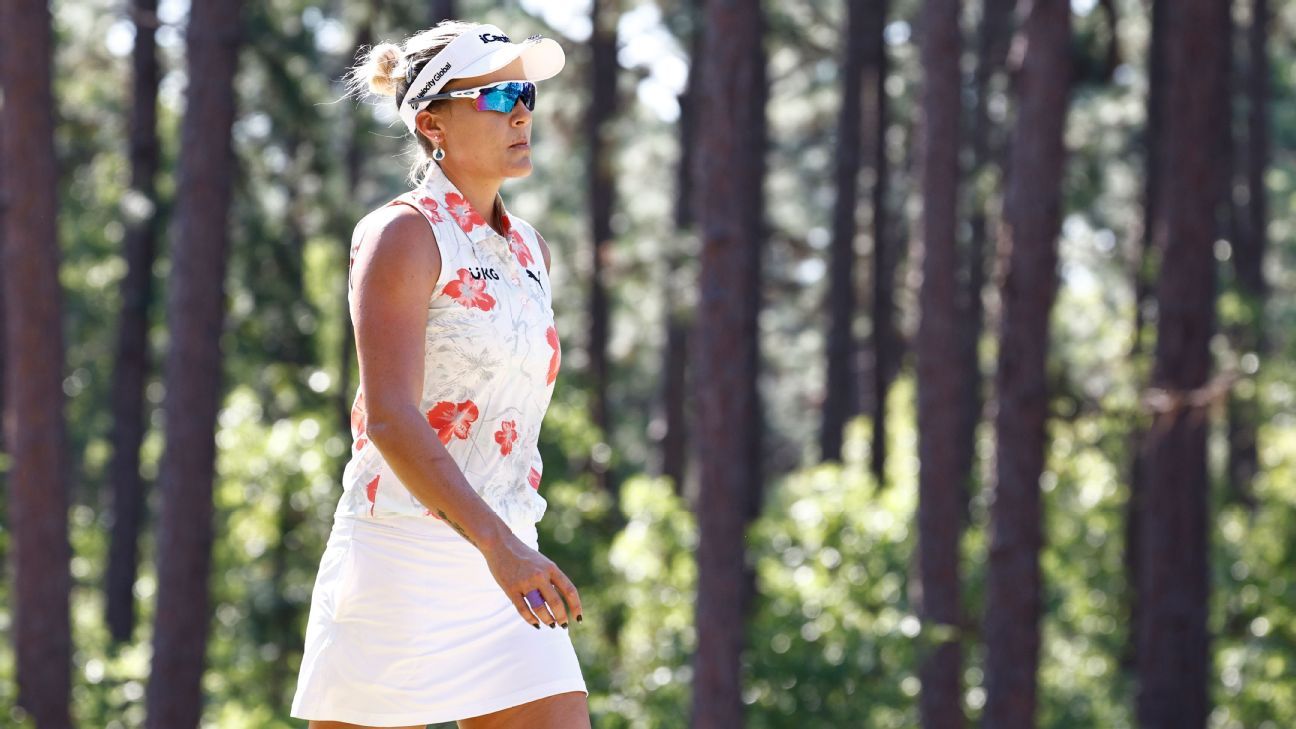 SOUTHERN PINES, North Carolina — Lexi Thompson can’t open up a Band-Aid. On the 18th tee box in the middle of a humid, 95-degree day during the first round at the U.S. Women’s Open, the sixth-ranked player in the world is going through a relatable problem: the back of her shoe is digging into her heel and the white glove on her left hand is not letting her get the relief she needs.

Thompson laughs at herself. Her caddie, Will Davidson, chuckles and helps her peel it off. It’s not the first or the last time the two share a moment of levity in the middle of her opening-round 68 at Pine Needles Lodge & Golf Club. By the time Thompson sinks a birdie putt on the final, eighth hole, her own smile speaks volumes. The last time she finished a round at this tournament, she lost a 5-shot lead on the back nine and the chance to win her first U.S. Women’s Open.

“As far as last year, it’s over with,” Thompson said after the round. “I took it, I learned from it. … I know my game is in a good spot.”

Over the past year, Thompson has found what works for her. She is devoting more time to her interests outside of golf, such as fitness, unplugging with her family and slowly realizing that better golf, for her, may mean having to think less about golf. Even while, well, playing golf.

“I used to be nonstop, so intense thinking about it,” Thompson, who in 2007 debuted in the U.S. Open when she was 12, told ESPN. “But then I realized you get so burnt out when you’re so in that moment 24/7, your whole round. So you need the balance. You need those few minutes of just letting your mind go and relaxing.”

Throughout her round Thursday, which has her tied for fourth place and 3 shots behind the leader, amateur Ingrid Lindblad, Thompson appeared laid back and, yes, plenty relaxed. She made conversation with Davidson before, during and after shots. She said thank you to every fan who wished her well and even paused to say hello to a young fan who she had met before.

“It’s good to see you again!” Thompson said to the girl before walking down the 18th fairway.

During a day that featured extreme heat and scores lower than hers, Thompson stayed cool. Literally — she was the only player in her group who wasn’t using an umbrella to shield herself from the sun — and figuratively: after carding a bogey and her only three-putt of the day on the third hole, she bounced back with three pars and a birdie.

“I’m from Florida,” Thompson said with a smile after the round when asked about the heat. “I’d rather be sweating than freezing.”

Thompson has made some changes to her game since last year’s stumble. She worked with Martin Hall on “holding off” her swing, which was growing inconsistent after she kept flipping at the ball. Davidson has also been a new addition, too. In the past, he has worked with Smylie Kaufman, Andrew “Beef” Johnston and Thompson’s brother, Curtis, on the Korn Ferry Tour. That’s how he ended up working with Lexi. The relationship has since blossomed.

“I needed somebody positive for me,” Thompson said, adding that she and Davidson have only worked together for nine events. “We just have a lot of fun on the golf course. I’m very intense. I love golf, I’m always thinking about it. He’s so upbeat, so it’s nice to have a balance where he gets my mind off in-between shots.”

One of those conversations came on the par-5 first hole. Thompson slingshotted a 3-wood off the tee and still outdrove her playing partners who used driver. She had 208 to the front of the green and 230 to the pin. Thompson’s 2-iron goes about 210, according to Davidson, but Thompson didn’t want to overshoot the front edge and have it run off the green. Davidson liked 2-iron, so they picked out a target where she could land it and Davidson told her to trust it. The shot went a little left, but it landed perfectly on the front of the green and left her with a 20-foot eagle putt — which she made.

“Honestly, I haven’t looked at a leaderboard or your position that I am at,” Thompson said. “I’ve just been trying to focus on my own game and my emotions. That’s all I can control.”

Even if she continues to get questions about last year’s final round, what Thompson seems to have taken from it is that she needed to evolve and find balance. In the process, her newfound confidence seems to have helped her turn a corner. If everything goes right this week, it may also be what gets her that elusive trophy. Even if it doesn’t, Thompson will surely find something else to learn in the process.

Here’s the prize money payout for each golfer at the 2022 Wyndham Championship
Triplett edges ahead at Shaw Charity Classic
Phil among 11 from LIV to file suit vs. PGA Tour
A week of firsts at Muirfield includes this special one for the Honourable Company of Edinburgh Golfers
Phil Mickelson was suspended by PGA Tour in March for recruiting players to LIV; currently banned for 2 years