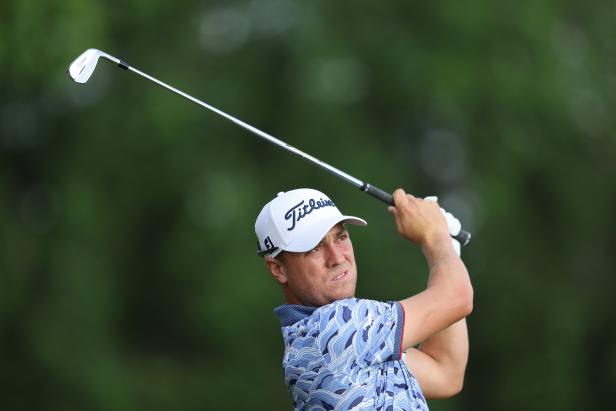 Good news, golf fans! The 2022 PGA Championship continues on Friday, even if many have already declared Rory McIlroy the winner. The four-time major champ certainly was sharp on Thursday with that opening round 65, and Southern Hills has a reputation for golfers converting leads into wins. But there is a LOT of golf left, and we can’t wait to get to it.

(Scroll down for the latest updates)

McIlroy’s playing partner, Tiger Woods, didn’t find the same success despite a nice start. Woods struggled down the stretch, both with his game and his body as the grimaces increased over the final couple holes on his way to shooting 74. He’s going to need a good round—and possibly, a new strategy, as our Dan Rapaport points out—to make it to the weekend. Rory, Tiger, and Jordan Spieth will tee off at 2:36 ET.

Weather is also something to watch out for. Stronger winds are projected for Friday’s morning wave, meaning you might hear a lot more about the DRAW this week. And there are possibilities of severe storms throught the day. Those storms are forecasted to make temps get significantly cooler over the weekend, though, so it’s not necessarily the worst thing—especially if you’re a fan having to pay $6 for a water (or $18 for a light beer) at the course. In any event, we’ll have you covered all day with the latest scores, news, and highlights. So keep it right here.

9:55 a.m.: And just like that, we have a tie at the top. Justin Thomas birdies the par-5 13th hole to move to five under. Thomas was forced to lay up after an errant drive, but hit his third from 88 yards to four feet and made the putt. We’re pretty sure CBS would be quite happy with a Rory-JT duel over the weekend.

9:48 a.m.: A popular pick coming into this week, Shane Lowry, is starting to make his move. After back-to-back birdies, the Irishman has moved to two under, three back of Rory McIlroy. Also at two under early is Oklahoma State product Talor Gooch and K.H. Lee, who is coming off that spectacular 26-under successful title defense at the AT&T Byron Nelson. Apparently, he can make birdies at courses other than TPC Craig Ranch.

9:35 a.m.: Justin Thomas hits a terrible birdie putt on No. 12, but he rolls in the eight-footer for par to stay at one under on the day and four under overall. But there’s not a lot of other players in red numbers out there right now. One guy who is, though, is JT’s SB2K buddy Rickie Fowler. After an early birdie he’s at even par. There haven’t been a lot of great finishes for the 146th-ranked player in the world of late, but one of those was a T-8 at last year’s PGA.

9:15 a.m.: OOOOOOOOO-klahoma, where the winds come sweeping down the plains! Seriously, it’s getting gusty in Tulsa, meaning the late-early wave looks to be at a big disadvantage this week. Wind will certainly be a factor still later, but maybe not the 35-mph gusts that we’re seeing, well, feeling right now.

9:03 a.m.: Justin Thomas continues his strong play from Thursday, hitting his approach on No. 10 to five feet and rolling in the putt for an opening birdie. JT quickly moves to four under, just one behind Rory McIlroy. Up ahead, Brooks Koepka bogeys No. 11 after beginning his round with a birdie on No. 10. Brooks drops back to five over as his slump continues.

8:15 a.m.: Well, that didn’t take long for a first birdie. Ryosuke Kinoshita makes one on the first hole. Look out! The course is GETTABLE today, folks! Unfortunately for the Japanese player, he didn’t make many birdies on Thursday on his way to a 79. Anyway, we’re underway.