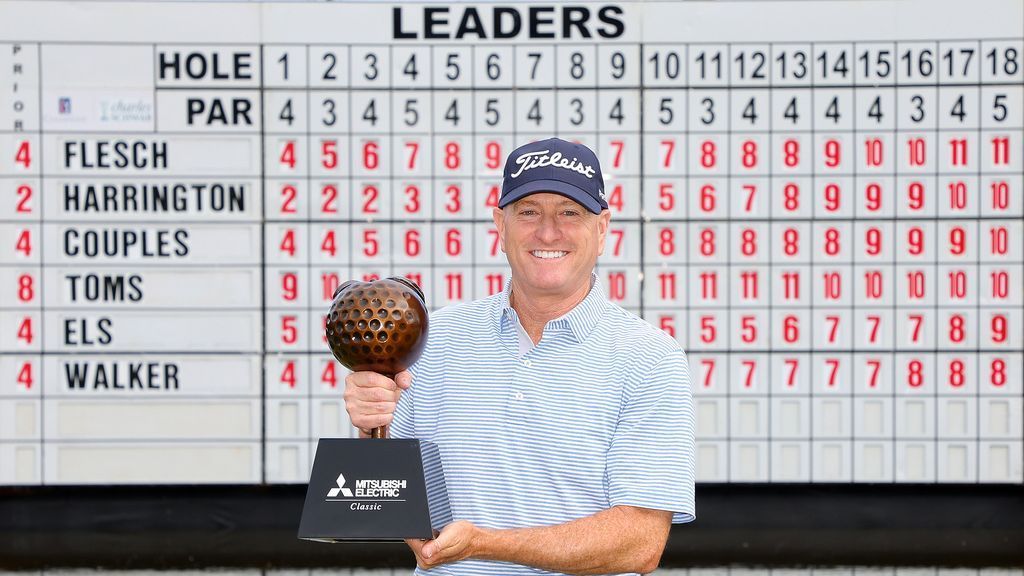 DULUTH, Ga. — Steve Flesch rallied from four shots behind Sunday with a 7-under 65 for a one-shot victory in the Mitsubishi Electric Classic, his second title at the TPC Sugarloaf.

Flesch also won this tournament in 2018, his only other win on the PGA Tour Champions.

Flesch finished the second round badly and figured he had nothing to lose. He even switched back to his old set of irons for the final round.

David Toms had a two-shot lead on the back nine when he missed a 6-foot birdie putt on the 13th and then a 6-footer for par on the 14th. Needing a birdie to force a playoff, Toms had a hybrid for his second shot on the par-5 18th and then chose to lay up.

Toms said he replaced his 5-wood with a gap wedge this week, and he wound up using the wedge just once. He said he could have used the 5-wood on the 18th.

Even so, it was the wedge for his third shot that cost him.

“The time I had that yardage today I hit it about a foot on No. 10, so I felt like it was an easy shot and just didn’t hit a very good one,” Toms said.

Toms finished one shot behind along with Padraig Harrington (64) and Fred Couples, who birdied the last hole for a 66. Harrington had a 7-foot birdie putt on the final hole that missed.

In the best weather and scoring conditions all week, Flesch ran off five straight birdies on the front nine to at least stay in range of Toms, who also started well. Flesch bogeyed the last two holes on the front nine, and those were the last of his mistakes.

Flesch also was in range of going for the 18th in two shots. He also chose to lay up with the lead, not wanting to bring water into play or a tough bunker to the left of the green.

Mark Walker, who had to go through Monday qualifying, shot 68 and finished sixth. That gets him into the next PGA Tour Champions event. That will have to wait until Iowa on June 3 because the next two tournaments on majors.

The Regions Tradition is next week in Alabama, followed by the Senior PGA Championship two weeks later.

PGA of America CEO says Saudi-back series is “flawed,” not good for the game
Tiger Woods has work to do at the PGA Championship, and here is how it is going
You WILL STOP slicing the golf ball with this EASY SHOULDER TRICK!
Jack Nicklaus reportedly turned down a staggering amount of money from Saudis to lead LIV Golf series
PGA Championship 2022 live updates: Mito Pereira brings big lead into Sunday at Southern Hills