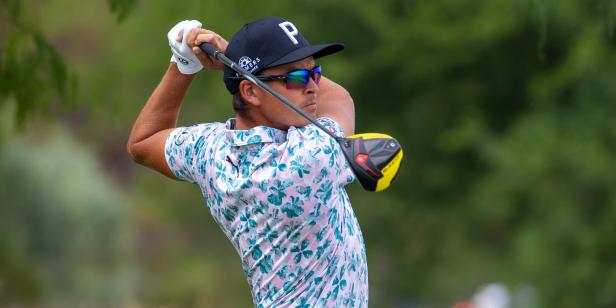 The field will feature 78 golfers with no cut, similar to last week’s CJ Cup. Neither previous winner (Patrick Cantlay nor Tiger Woods) will be teeing it up this week, but headliners like Collin Morikawa, Hideki Matsuyama and Xander Schauffele provide plenty of starpower.

Here are my favorite plays (and fades) in each price range.

It feels like we are chasing points with Fowler but this still appears to be a good spot to deploy him. Fowler gained nine strokes from tee-to-green last week, the best mark in the field. He also gained 5.52 strokes off-the-tee last week, which led the field. He’s averaging 2.18 strokes gained per round over his past five rounds and will look to keep the momentum going in Japan.

Per the RickRunGood.com golf database, Tringale has gained 1.03 strokes per round over this season and last season. That’s the best mark of any golfer priced in the $9,000 tier on DraftKings. Even more impressive, he’s the only golfer in that range to gain strokes in all four major categories during that stretch. His all-around skill-set gives him a high floor on a weekly basis.

McNealy struggled at his home course last week, losing strokes in both the ball-striking categories. If he hits the ball that way this week in Japan, he’s going to be in big trouble off-the-tee and will require his short game to bail him out, something that is always hard to rely on.

Grillo caught fire on Sunday at The Summit Club, shooting a 62, gaining 7.05 strokes on the field. Grillo is always an excellent ball-striker, but he gained over four strokes with his putter in that final round. If he can carry any of that good feeling to this week, he could make plenty of noise.

Griffin, when going well, is great at two things: approach play and putting. That combination is the essence of volatility. When he has both of those aspects under control, he can fire low rounds and fly up the leader board. With four guaranteed rounds in Japan, Griffin can post plenty of fantasy points, even if he doesn’t contend.

It’s always an interesting field when Vegas’ name appears in the “safe” category, but it’s well deserved. Narashino C.C. will reward great drivers, and Vegas is certainly a great driver. Combine that with his improved approach play, gaining strokes in eight of nine, and you’ve got yourself someone you should be able to rely on!

It pains me to put Palmer’s name in this section, but I believe it’s necessary. Palmer has missed four of his past six cuts, and though he won’t have to worry about the cut this week, he hasn’t had an individual top 10 since the Farmers in January. He’s lost strokes on approach in three straight and has lost a combined 16.54 strokes with his putter over his past five measured events.

Schenk knocked on the door at the Shriners but it didn’t open, finishing T-3 that week. This is a position he’s been putting himself in more regularly, with three top-four finishes in his past nine starts. He’ll continue to build that scar tissue and continue to knock until the door finally opens.

Kanaya is a staple on the Japanese Tour and hasn’t finished outside the top 20 in seven consecutive events. He spent 55 weeks atop the World Amateur Rankings before turning pro, and he’s now ranked 76th in the world. He’ll be comfortable at Narashino this week and he has plenty of game to contend.

You know about strokes-gained metrics, but do you look at fantasy-points gained? That’s a similar calculation but looks at the average fantasy points for each week, which helps compare the time frame from the CJ Cup to the U.S. Open. Steele has gained 14.2 fantasy points on the field, per event, since the start of last season. That’s the most of anyone in the $7,000 range.

Streb got off to a hot start at The Summit Club, shooting a 61 on Thursday and taking the early lead. When the dust settled, he finished T-9 and lost strokes on approach for the week. That top-10 was his first since his victory at the RSM Classic last November. There’s little evidence that he will back up a great week with another one.

Higgs is finding his game right now and had a great Vegas Swing, finishing T-27 at the Shriners and T-9 at the CJ Cup. In the latter, he gained over four strokes on approach and continued his stout play on and around the greens. His game is trending in the right direction, and he certainly doesn’t lack the confidence to go low.

NeSmith is certainly a member of “Team No Putt,” relying on his approach play and hoping that the putter cooperates for a week. We last saw him at the Shriners where he finished T-14 and flashed that ball-striking brilliance. To me, this is a second-shot course, and NeSmith is a second-shot player.

There’s a case to be made that Kang is one of the most mis-priced golfers in this field on DraftKings. He’s made five consecutive cuts on the PGA Tour, not a concern this week, but his short-game magic should help him climb his way up the leader board. At this price, you’re not asking for much in return from Kang.

Imahira played in two majors in 2020, making the cut in both of them. Since the end of last year, he’s played almost exclusively on the Japan Golf Tour and has six top-10 finishes in his past 16 events. He won the Fujisankei Classic in September over notables like Ryo Ishikawa and Takumi Kanaya.

PGA Tour can limit use of green-reading materials with USGA and R&A approving new Local Rule
What to make of Tiger Woods’ interview? Our writers weigh in on his recovery and future
Why the Hero World Challenge might be the most player-friendly tournament ever
The confusing rules situation that cost Jordan Spieth two shots at the Hero World Challenge
ONLINE COACHING VIA SKILLEST | GOLF TIPS | LESSON 204