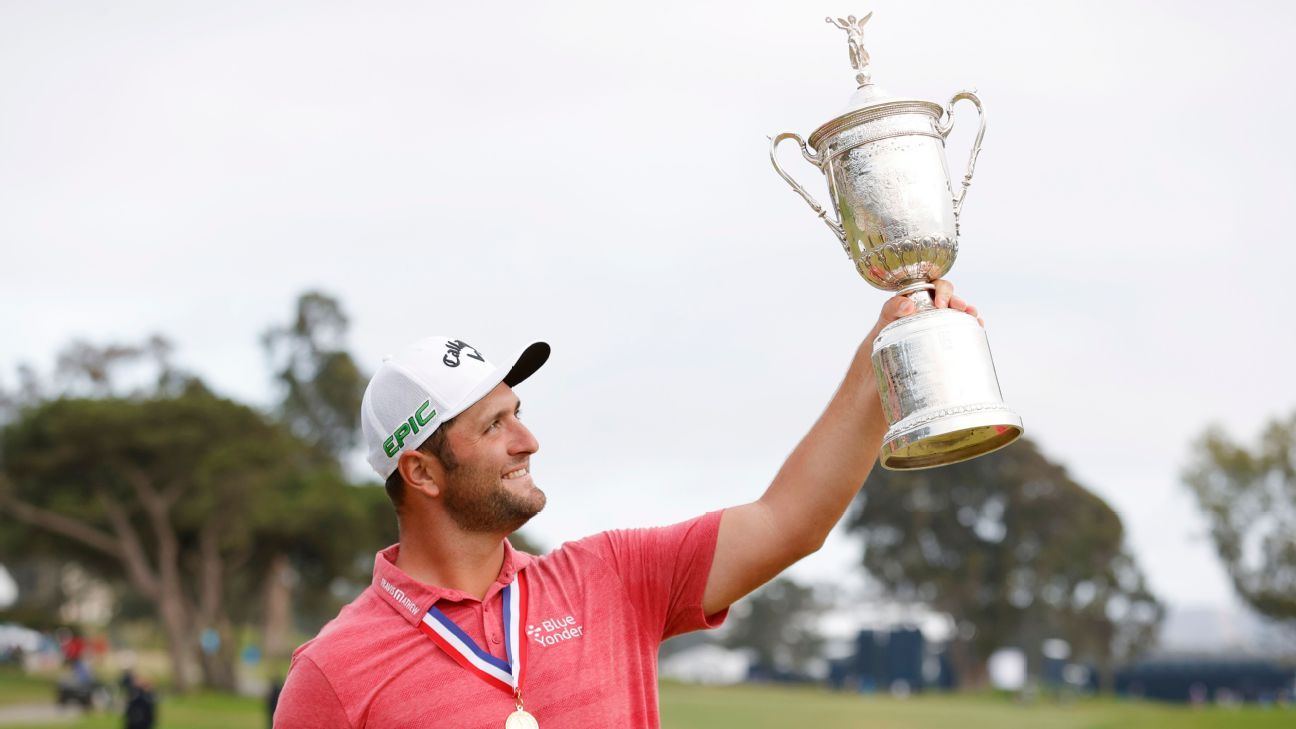 SAN DIEGO — From tears of dismay to tears of elation in the matter of 15 days. That is how quickly Jon Rahm went from a low point to the biggest moment of his career.

On June 5, with a six-shot lead at the Memorial, Rahm walked off the 18th green and was told he had tested positive for COVID-19 and would be forced to withdraw from an event he was most likely going to win the next day. He remained in isolation until June 12. Then, eight days later, he was on the 18th green at Torrey Pines celebrating his first major championship and Spain’s first U.S. Open title.

“I believed from the biggest setbacks we can get some of the biggest breakthroughs, and that’s why I stay so positive,” Rahm said. “That’s why I kept telling (wife) Kelley, when she was devastated about what happened and my family and everybody around me, something good is going to come. I don’t know what, but something good is going to come. I felt it today out there on the golf course.”

Somehow Rahm navigated the tricky South Course as others — Bryson DeChambeau, Rory McIlroy, Brooks Koepka, Louis Oosthuizen and more — could not avoid disaster. At a place that was already special to him before what happened Sunday — Rahm and Kelley got engaged near Torrey Pines — Rahm rolled in two huge birdie putts on the final two holes to capture the win. He made just one bogey en route to a 4-under 67, which matched the lowest round of the day.

“This is the first of many,” said Tim Mickelson, the younger brother of Phil, who coached Rahm when he played college golf at Arizona State University. “It was hard not to think he was special when he shot 62 in the NCAAs as a freshman. That’s a pretty good indicator.”

Tim Mickelson believed in Rahm so much that he left his job at ASU to become Rahm’s agent when he turned professional. Later, Tim Mickelson decided to go caddie for Phil.

Though Phil Mickelson, with Tim on the bag, finished their U.S. Open earlier in the day, they returned to Torrey Pines later to see if Rahm could close out his first major title. Phil Mickelson had so much faith in Rahm’s ability back when Rahm turned pro in 2016 that he bet another tour player, Colt Knost, that Rahm would be ranked among the top 10 in the world within a year.

That seemed a longshot for even the best of emerging players. But Mickelson was right and won the wager.

“I will neither confirm nor deny it,” Tim Mickelson said when asked about the bet. “But I can tell you this — neither one of us would have bet against him.”

The good vibes at this place for Rahm go beyond getting engaged here. He won his first PGA Tour event at Torrey Pines in 2017 when he captured the Farmers Insurance Open by holing a long eagle putt on the final green.

The putt Sunday was much shorter, a 15-footer, but it was every bit as dramatic. Tied at 5 under with Oosthuizen — and knowing Oosthuizen was behind him and would also have a good birdie chance at the par-5 finishing hole — Rahm blasted out of the bunker to give himself a curling putt for one last birdie. He knew what was at stake.

“I trusted my read, and as soon as I made contact, I looked up and saw where the ball was going,” Rahm said. “It was exactly the speed and line I visualized. I told myself, ‘That’s in.’ If you could see my thoughts with 10 feet to go, in my mind, I’m like ‘That’s in the hole.’ And it went in.”

Are ESPY awards in the bag? Cast your votes today for best golfers and more.

Rahm celebrated with emphatic fist pumps as the fans surrounding the green roared.

It was a far different scene than on the Saturday of the Memorial, where Rahm walked off the 18th green with his tournament suddenly over. That news was devastating, but Rahm handled it.

He was allowed to travel home and isolated in another section of his house, away from his wife and newborn son. His parents, who had traveled from Spain to meet their grandson for the first time — and whom Rahm had not seen during the pandemic — had to keep their distance.

“It was tough,” Kelley Rahm said. “He had to stay away from his parents. But he had a great attitude. He practiced on his simulator. He handled it well.”

“The way he handled the situation at Memorial says it all,” Tim Mickelson said. “Maturity is there. He’s misunderstood by the public. He’s the most caring guy ever. He’s very thoughtful toward the people around him. I’m happy he was able to do it on one of his favorite courses in the world.”

Rahm has developed a reputation as someone with a quick temper. That was another obstacle he has been working on. It was bad at the PGA Championship, where his caddie, Adam Hayes, said he “didn’t play well and he acted horribly. He knew it and has embarrassed by it.

“I said later that would be one of the most important days of his career.”

Rahm still shows his emotion on the course, but the way he handled the Memorial situation suggested he had learned to better deal with adversity. And there was plenty of it on a difficult U.S. Open course at Torrey Pines.

“He never got mad,” Hayes said. “Sure, he might slap his thigh and be upset. But it was accountability. And the Memorial was a motivating factor coming here. Maybe everything happens for a reason.”

Rahm said he had a call in the aftermath of the Memorial from Padraig Harrington, who once had a five-shot 54-hole lead and was disqualified for an incorrect scorecard. Nick Faldo texted with a similar story.

Both players used those negatives to win the following week.

“I knew today was my day,” Rahm said.

Not only did he win on his first Father’s Day, but Rahm moved into the No. 1 spot in the Official World Golf Ranking.

“He’s won two tournaments in a row. I don’t care what anyone says,” McIlroy said. “He had that title (at the Memorial). It was unfortunate. Mentally, I think you have to be in a good place to bounce back from something like that. Obviously he knew his game was there. He just had to go out and play the way he knows he can.

“And he’s obviously had success here at this golf course. I don’t think there’s a golf course where he can’t have success on. He’s that good of a player. He was a major champion in waiting. It was just a matter of time.”