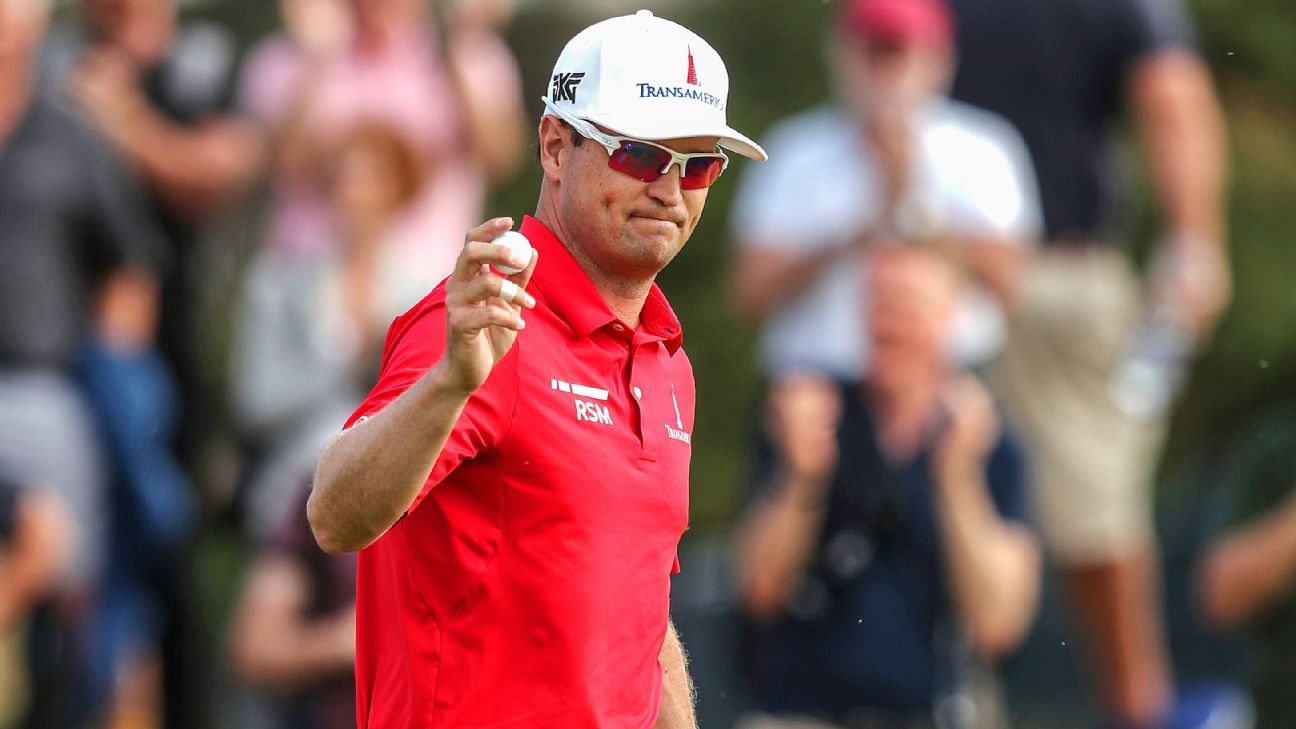 Zach Johnson had quick success after a long road to the PGA Tour. He won as a rookie and reached the Tour Championship in Atlanta, where one of the perks was attending a ceremony to watch Jay Haas accept the Payne Stewart Award.

He remembers it being powerful, inspiring and motivating. It brought Johnson to tears 16 years later when he was selected Wednesday to receive the Payne Stewart Award.

Few got more out of their game than Johnson, who famously described himself as a “normal guy from Cedar Rapids, Iowa” when he won the Masters. His 12 victories on the PGA Tour include the 2015 Open Championship, making him one of only six players to win at Augusta National and St. Andrews.

The award began in 2000 after Stewart, a three-time major champion, died in a plane crash on the way to the Tour Championship. As it enters its second decade, the award now is regarded as the most prestigious on the PGA Tour.

Byron Nelson, Arnold Palmer and Jack Nicklaus shared the award the first year. Since then, past winners include Haas, Steve Stricker, Jim Furyk, Ernie Els, Davis Love III and Nick Price. It goes to the player who best exemplifies Stewart’s value of character, charity and sportsmanship.

Johnson, 44, is the first winner who has never met Stewart, which was bound to happen over time. Stewart died five years before Johnson’s rookie year. Even so, Stewart was one of his idols. For years, when asked for his dream foursome, Johnson mentioned his father, Ben Hogan and Stewart.

“I always liked his golf swing. In the most difficult of situations, his best game came out,” Johnson said. “I love how he changed his life. He was a prankster. He was a character. But he lived his faith, and I greatly admire that.”

Johnson met Stewart’s wife, Tracey, and children Chelsea and Aaron before he made it to the PGA Tour. He was living in Orlando, Florida, and Johnson and his wife went to a Payne and Tracey Foundation event. Johnson later used the same financial advisers for his charity work.

But when he saw them most recently, there was momentary confusion.

Johnson was out of town at a family gathering when his agent told him he had two remote conferences on his schedule. Johnson figured it was about the Ryder Cup, for which he is an assistant captain. Johnson was trying to get logged on for the calls when his wife, Kim, came into the bedroom and said she needed a break.

Only later did he realize she was there to film him.

“I get on and it’s kind of fuzzy, and I can see smiles and I was like, ‘I recognize him,'” Johnson said of seeing Aaron Stewart. “And then I see Chelsea Stewart and thought, ‘Is she still with the PGA Tour?'”

Chelsea Stewart previously worked in a corporate marketing capacity at the tour. Then he heard a voice say, “Tracey, can you hear us?”

And that’s when it hit him.

“I started crying,” Johnson said. “My wife recorded it. She knew it was a big deal. She knew how big of a deal it is to me. I love what the award represents. I love the fact the PGA Tour is honoring Payne and his legacy. … What it did for me was it highlighted the fact I’ve been around great people, whether it’s sponsors, my foundation board, the guys who started me [financially], my family. I’m so fortunate to be around good people.”

Johnson needed a group of investors just to keep alive his dream of playing golf when he graduated from Drake. He played on any tour he could find, piling up mileage on a Dodge Intrepid. A good year meant he had money left over to pay back his investors, which he did five out of six years traveling the country.

He made it to the Nationwide Tour and won the money list in 2003. A year later, he won the BellSouth Classic outside Atlanta, and in 2007 he became a major champion.

Now he returns to Atlanta for an award that means just as much.

PGA Tour commissioner Jay Monahan referred to Johnson as a “fearless underdog” and a statewide hero in Iowa for his charitable work.

“Zach would say he’s just a normal guy from Cedar Rapids, Iowa, but in truth, he has one of the most compelling stories on the PGA Tour in the last 25 years,” Monahan said.

Johnson will be honored Sept. 2 during the Tour Championship in Atlanta.

How to Make the Golf Swing Easy – 2 Basic Moves for Great Ball Striking Every Time
This Is How To Hit Your Driver w/ Micah Morris | Good Good Labs
Golf ball BOUNCES out of the water! 🤯
Si Woo Kim exorcises TPC Southwind demons, Tony Finau can do no wrong and Rory McIlroy’s slow start
Get into golf with The PGA and Find a Golf Lesson!