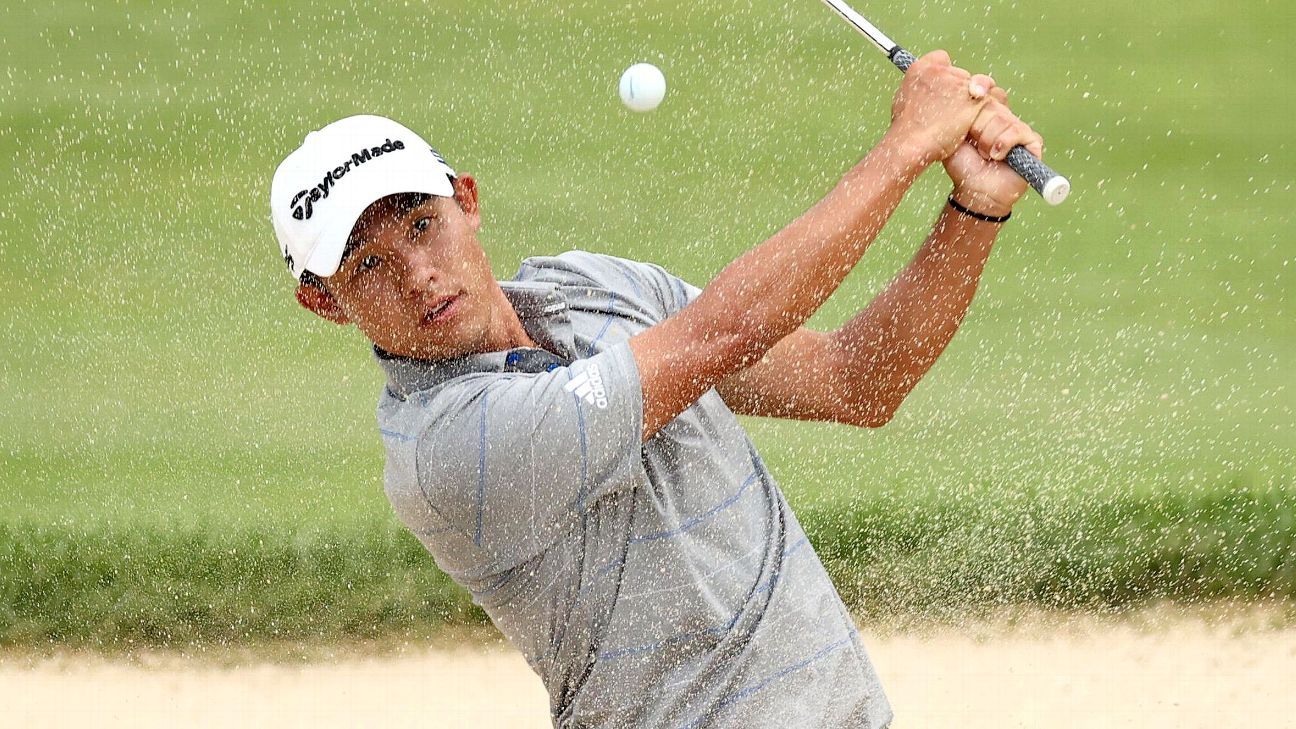 DUBLIN, Ohio — Among the lessons Collin Morikawa took away from missing his first cut as a pro was that his reliable cut shot had left him. He found at it Muirfield Village, and suddenly looks as though he’ll be tough to catch at the Workday Charity Open.

Morikawa ran off four straight birdies after making the turn Friday, finished with another birdie and shot 6-under 66 to build a six-shot lead when thunderstorms arrived in Ohio.

The Workday Charity Open, which replaces the canceled John Deere Classic for this year only, has been set up a little easier than it will be for the Memorial next year, with slightly slower greens and rough that isn’t quite as high or thick.

Morikawa is still playing a different brand of golf than anyone else. Through two rounds, he has 15 birdies and an eagle. His four bogeys have come from silly mistakes that are bound to happen.

Ian Poulter, back at Muirfield Village for the first time since 2009 because of a reconfigured schedule brought on by the COVID-19 pandemic, had a 69 and was six shots behind.

Sam Burns and Chase Seiffert also were at 7 under with a few holes remaining when play was stopped for the second time Friday because of the rumbling thunder and lightning that seems to appear whenever the PGA Tour is at Muirfield Village.

“Who knows who’s going to take it deep today?” Morikawa said. “Whether I have the lead or not, I’ve got to go into the weekend feeling like I’ve got to make the same amount of birdies I have the past two days. I feel like there’s a lot of birdies out there for me especially, the way I’ve been hitting it.”

Morikawa, who turned pro just over a year ago after graduating from Cal, is making his debut at the course Jack Nicklaus built, and perhaps it’s no coincidence that Nicklaus was famous for hitting a cut.

“I had heard from a lot of people before, this course was going to suit a left-to-right shot, anyway,” Morikawa said. “Obviously, Jack hit that, and I think it does. But I’ve been able to leave myself some really good numbers into approach shots. I’ve been keeping myself in the fairway for the most part, and that obviously helps.”

Among those playing in the afternoon, Jon Rahm and Brooks Koepka first had to worry about making the cut after sluggish starts. Koepka started at 2 over. Rahm was at even par.

Phil Mickelson had another exciting day, minus the meltdown at the end of his round. He opened by chipping in for birdie and making a 12-foot eagle putt. With the tee moved forward on the 14th hole, the par 4 guarded by a pond right of the green, he hit driver to 10 feet and had to settle for birdie.

And right before the first batch of storms arrived, Mickelson felt the wind shift and get stronger, so he took driver on the par-5 fifth and whaled away over the trees and just inside backyard fences. It settled in the rough, but it left him only 114 yards away and a pitching wedge to the green.

The speed of the greens fooled him, and he repeatedly left putts short. Even so, he managed to post a reasonable number. Jordan Spieth wasn’t as fortunate. He took double bogey on his 17th hole, the par-3 eighth, and was likely to miss the cut.

Morikawa had made 22 cuts in a row to start his pro career, a streak that ended two weeks ago at the Travelers Championship. That was three short of the streak Tiger Woods put together when he turned pro.

But the 23-year-old Californian was more interested in low scores than simply getting in four rounds and a pay check.

“At the end of the day, you’re out there to win tournaments,” he said. “If you miss the cut, make it by whatever, you just want to learn from each week. And like I said, I learned a lot from those two days missing the cut than I have in a lot of events so far when I’ve been finishing whatever.”

This one caused him to take a closer look at what was lacking in his game, instead of being reasonably content with a solid finish.

“I think sometimes when something really doesn’t go your way, like missing a cut, it just stands out a little more,” he said.

Somewhere along the way, he couldn’t rely on his cut shot, allowing him to aim some 6 yards left of his target and fade it toward the pin, no matter where it was located. It was after his practice round Wednesday that he figured out what was missing, and he went back to an old drill of sticking his glove under his left arm. It’s a rotational drill, and it paid off.

He had to wait until the storms to see if anyone could catch him, with the second round not likely to end until Saturday.