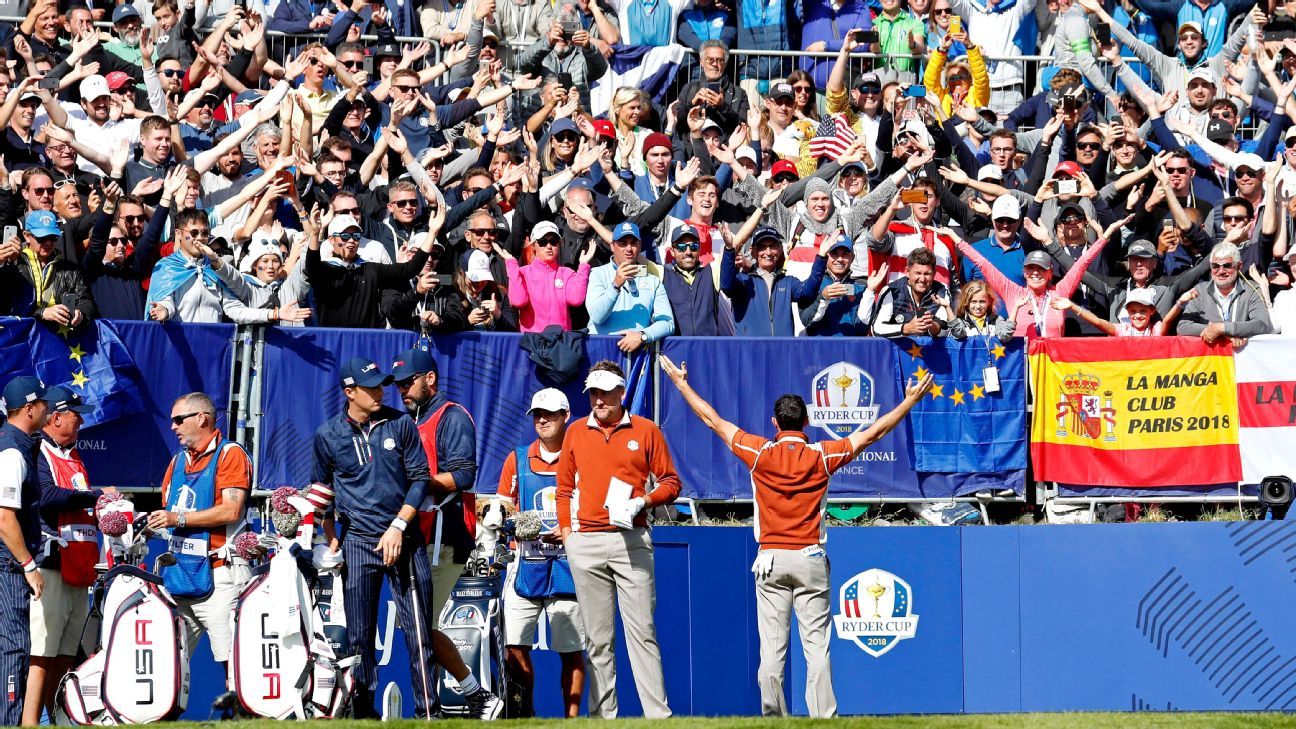 How much do we crave to have the argument over whether the feverish crowd at Hazeltine during the 2016 Ryder Cup had crossed the line of decorum?

Now, there is no line.

The Ryder Cup has been postponed a year, a sensible and obvious decision in the wake of the coronavirus pandemic that left officials at the PGA of America and European Tour pondering an event with closed doors.

Squabbles about fan decorum seem quaint now that there won’t be fans — or a Ryder Cup at all.

“The Ryder Cup without fans is not the Ryder Cup,” McIlroy declared months ago, when the possibility remained that the event could be played on the shores of Lake Michigan at Whistling Straits without the yelling and screaming that the Northern Irishman endured the last time the event was staged in the United States.

Some 50,000 spectators a day packed Hazeltine four years ago. They came ready and roaring, fueled by flowing alcohol and the freedom that comes with a Ryder Cup, where cheering and booing is expected and taunting of the opponent comes with the territory.

It was much the same two years ago at Le Golf National outside of Paris — although the event was lacking the boorishness observed two years before that — when the Europeans romped to victory in front of a serenading home crowd.

That, in essence, is the Ryder Cup.

And to not have that in any form would be nearly as depressing from a sporting standpoint as what all have endured during these unprecedented times.

Sure, there was an argument to be made to play the Ryder Cup in front of small gathering or none at all.

The PGA of America and the European Tour reap millions upon millions from their co-owned, every-other-year-spectacle in the form of television rights fees. Make no mistake, playing to the sound of crickets and cashing those big checks was a huge consideration here.

The PGA has already committed to a spectator-free PGA Championship next month; the European Tour has forgone millions as its schedule was interrupted, resuming only this week in Austria with drastically reduced purses.

Don’t forget the PGA Tour. It has no financial stake in the Ryder Cup, but its players participate. And the tour has undergone its own financial hardship this year, with 13 weeks of tournaments lost. Asking the PGA Tour to delay the Presidents Cup — and its big-money payoff — by a year was never going to be easy.

And we’ve seen golf do quite well so far without spectators. It’s enjoyable to watch it on TV, just as the Ryder Cup would undoubtedly be as well. And given the current climate, golf without spectators is better than no golf, right?

“I personally don’t want to play if there’s no fans; I don’t see a point in playing it,” Brooks Koepka told Golf Channel in May. “The fans make that event. That’s why we get nervous on the first tee. You hear everything that’s going on. The U-S-A chant. All that stuff. That’s what makes it fun.”

And nerve-wracking. All manner of players over the years have noted the difficulty of simply teeing up their ball on Friday morning. The cauldron of noise and commotion surrounding the first tee is as intense as anything in golf. It matters.

Koepka likened a spectator-free Ryder Cup to playing a simple match at home. Without the atmosphere, there is no Ryder Cup.

Four years ago, there might have been too much atmosphere. At the time, it was hard to believe that even at the Ryder Cup, where McIlroy was deemed the enemy to American fans for three days, he was treated with such disdain.

After all, he is one of the most likable guys in the game. He had just come off a playoff victory to win the Tour Championship. And he had already established himself as one of golf’s leading lights.

And yet, he was heckled to the extreme during the Saturday afternoon matches, to the point of having to ask for a foulmouthed spectator to be escorted out. His then girlfriend (now wife) Erica was subjected to a fair amount of abuse, too. It went over the line.

McIlroy seethed, but still managed to play some of his best golf in what turned out to be a rare U.S. team victory.

The pandemic has surely brought perspective, and undoubtedly there will be a bit more decorum if the Ryder Cup goes off as planned next year at Whistling Straits.

Just as the mood changed in the aftermath of the postponed 2001 Ryder Cup after the Sept. 11 terrorist attacks, so too will the vibe be different. It is likely to be every bit as vocal and partisan, but perhaps lacking in some of the venom.

Given the current circumstances, it’s hard to envision how even a fraction of the rowdiness at a Ryder Cup could have occurred this year. A scaled-down version was a hope for a time, but even that ultimately was thwarted by all the challenges local and state governments face in assuring safety.

And a no-spectator event made sense from a purely financial standpoint, if not when considering the main reason it is enjoyed by so many — the spectacle.

So now we wait. New Ryder Cup qualification criteria will need to be determined. Numerous legal and financial issues need to be sorted by the various golf organizations. Seven major championships will be on the minds of players before they ever get to Wisconsin for the delayed Ryder Cup.

And, quite hopefully, thousands upon thousands of spectators will be allowed in, roaring in Rory’s ear — with him enjoying every second of it.