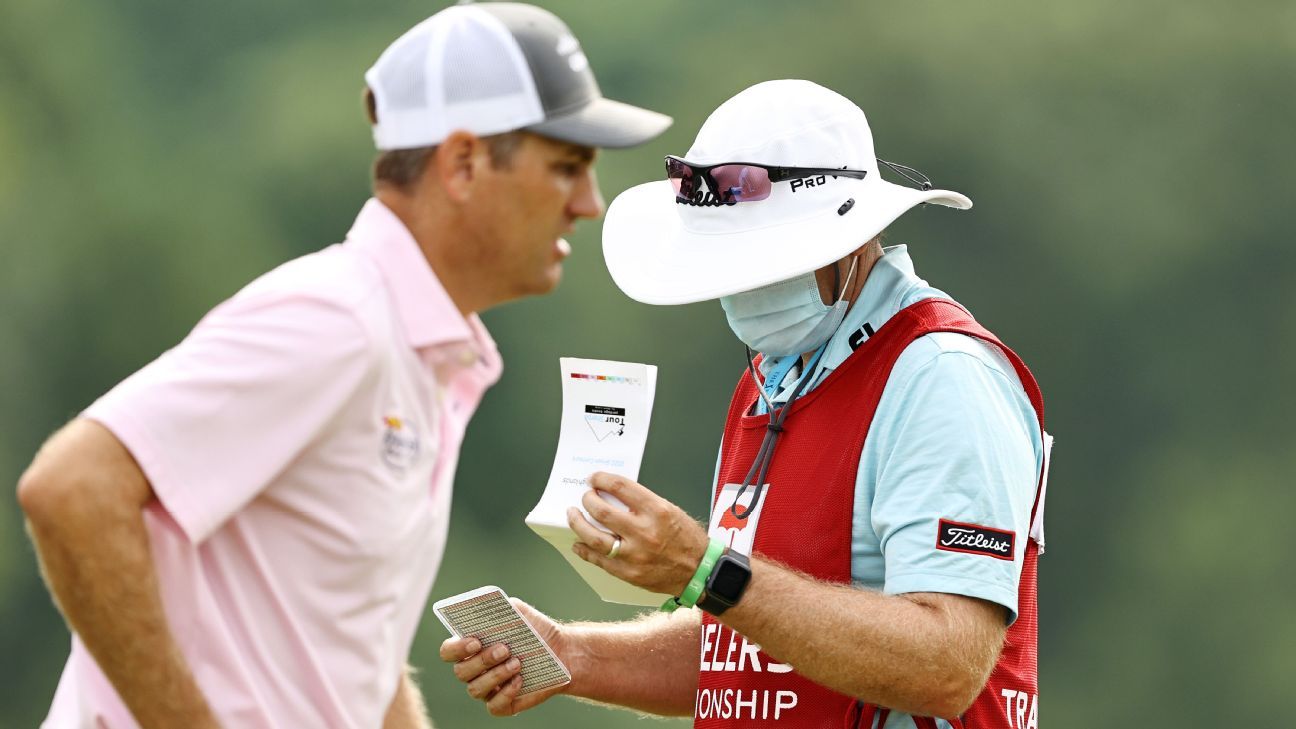 CROMWELL, Conn. — Nothing about the PGA Tour’s return was ever going to be easy. If that wasn’t clear before, this week at the Travelers Championship quickly brought back the reality of just how complicated playing golf is going to be each and every week. Perhaps two quiet weeks after a three-month layoff due to the coronavirus pandemic initially fooled everyone, with players, caddies and Tour officials all being lulled into a false sense of security, relaxing here and there on some of the guidelines, and letting their guard down just a little bit.

So yes, the stark reality of all this was evident all across the property, every day of the week.

And now, after a week that produced multiple warnings and as many strong signs of the sport’s resilience, this traveling circus packs up its tent and heads to Detroit for the Rocket Mortgage Classic. But this week at TPC River Highlands taught some lessons, offered some stark reminders, brought some renewed focus and forced some stricter protocols to keep the sport from going back into shutdown.

The golf itself was phenomenal. There was 50-year-old Phil Mickelson opening with 64-63, offering a glimpse of the past and the possibility that there is still some magic and wins hiding in his golf bag. There was the bulked-up Bryson DeChambeau, pummeling a 428-yard drive in Friday’s second round as he muscled his way into a contention for a third straight week as he proves there is method to go with madness. There was (insert about eventual winner ….)

But even the strong play by the world’s best came with harsh reminders this is different. There was, again, the stillness, the eerie quiet. Golf has a recognizable soundtrack — the roars of Amen Corner, the groans as a ball splashes in the water beside the island green at TPC Sawgrass, the straight-up party at the 16th at the Waste Management Phoenix Open. There is also a specific buzz, then blast of noise that only a few of the sport’s biggest names — Tiger, Phil, Rory — get when they are doing something special.

Late Friday afternoon, Phil Mickelson stood in the middle of the 18th fairway. His approach shot landed a few inches from the hole and settled tidily next to the pin for a tap-in birdie to finish off a highlight-reel 63. The Travelers isn’t a major, but it now annually gets an elite field and usually has loyal, large galleries. The 18th green, normally, always sits full, the ovations are always appreciative and, in special cases, like when Jordan Spieth holed out from the bunker to win in 2017, the cheers are overwhelming .

The sound of Mickelson, a fan favorite, finishing off a 63 to head into the weekend as the sole leader of the Travelers would have had your eardrums ringing the entire car ride home. Instead, as the ball narrowly missed going in for an eagle 2, there was one low, muted “Ooooh” from a volunteer seated next to the green.

“Even though it’s quiet and it doesn’t have the same atmosphere, it still is cool that we’re able to do this,” Mickelson said.

He, like everyone, is still learning. And that was what this week was about for the PGA Tour, although surely commissioners of major sports and Division I athletic directors were paying close attention, too. Because this week, 5.3% of NBA players tested came back positive. Health experts expressed concern as Major League Baseball approaches its restart. The Clemson football team announced 14 more positive tests, running its total to 37. Golf, despite being best built for a social distance, saw how quickly the virus can spread.

On Tuesday, all seemed well. Then, late in the afternoon, Cameron Champ withdrew after testing positive for COVID-19, giving the PGA Tour its second positive test. The next morning, the rumblings started that there were more withdrawals on the way. First, it was Graeme McDowell who pulled out after his caddie tested positive. Then the biggest name so far exited, with Brooks Koepka removing himself from the field after his caddie also tested positive. Koepka’s withdrawal carried significant weight, and not simply because he is a four-time major champion and currently the fourth-ranked player in the world but because not 24 hours earlier, he had stressed how seriously he was taking the virus.

“I’ve told everybody on my team they’re pretty much on lockdown,” he said the day before his withdrawal. “If they don’t want to do that, then they don’t have to be with us. It’s pretty simple. I told [swing coach] Claude [Harmon], I’ve got my chef that’s traveling with me, and I brought basically my own gym, I brought free weights, bands. Everything you see in a gym, we’ve brought. There’s no reason that anybody should leave the house. The chef obviously leaves the house to go get food, but that’s about it. But she’s still using the best face mask, everything she can when she gets back, washing her hands, doing all these things, and just trying to limit our exposure. I think that’s been the big thing.”

Michael Eaves details why Jason Day played a round solo after he tested negative for the coronavirus.

Koepka tested negative, but to his credit, for the safety of those he might be paired with or practicing next to and for the overall health of the sport, he packed up his things. In a cruel twist, his brother left, too. Chase Koepka survived a five-players-for-two-spots playoff in a Monday qualifier just to get in the Travelers field. Brooks was there, at Ellington Ridge, about 25 miles down the road from TPC River Highlands, to watch his brother earn a spot. The next day, Brooks talked glowingly about his brother, how excited he was to have him in the field, how hard he knows it is for Chase to be in the shadow of his brother. But just like that, they were both gone. Webb Simpson, who won the week before at the RBC Heritage, also withdrew after a family member tested positive for the virus.

Suddenly, the mood had changed. The rest of Wednesday’s player interview sessions were called off, replaced with a 2 p.m. news conference from PGA Tour commissioner Jay Monahan. A little after it was announced, the time was pushed to 2:30 p.m. There were growing rumblings that, perhaps, the event would be called off, that the PGA Tour was headed back toward lockdown. There was another scenario at work at the same time that day: Connecticut, where the Travelers was being played, New York and New Jersey had announced they were requiring visitors from nine states to quarantine for two weeks. Two of the states on the list? Texas and South Carolina. The two previous stops, before the Travelers? The Charles Schwab Challenge in Fort Worth, Texas, and the RBC Heritage, in Hilton Head, South Carolina.

But Monahan did not put another freeze on golf; instead, he implemented stricter protocols and promised “severe repercussions” to those who ignored the guidelines.

“We knew it would be impossible to eliminate all risk,” Monahan said.

The idea of a full stop never started.

“I think people — you hear one or two positive tests and people are panicking, and I saw a couple of calls to shut the tournament down, which is silly from my point of view,” Rory McIlroy said. “You know, I thought [Monahan] did a really good job explaining. There’s been almost 3,000 tests administered. The percentage of positive tests is under — it’s a quarter of a percent.”

On Friday, Denny McCarthy withdrew after testing positive. One of his playing partners, Bud Cauley, withdrew out of precaution. Although Cauley tested negative, he admitted he wasn’t feeling well and decided not to play on. That brought the total to seven coronavirus-related exits from the Travelers. The third member of that group, Matt Wallace, remained.

“I was scared,” Wallace said about the moment he found out McCarthy tested positive and Cauley wasn’t feeling well.

And that led to question, fair or not, for Wallace: Should he still be here? Should he have followed McCarthy and Cauley even though he had tested negative?

“Well, I’ll put it to you: Do you think I should have played?” he asked.

Therein lies the entire conversation: Nothing about this return to golf was going to be easy. He could have followed “the abundance of caution” approach. Fair argument. But he also tested negative. The spotlight is going to be cast on players who haven’t asked for it and who have done nothing to warrant it.

“I’m playing with a chance to change my career if I win, so why wouldn’t I play,” he said. “It’s black and white for me. I tested negative and I can go play.”

But while he waited, he was on property, keeping to himself.

But this week, the cloud of uncertainty wasn’t done. On Saturday morning, Jason Day asked to be tested again. He had an 8:19 a.m. tee time. Clearly, he wasn’t going to get a result in time. So his tee time was pushed back. He didn’t play with Rafa Cabrera Bello and Rogan Sloan, as scheduled. Instead, as the tournament leader Mickelson teed off on the first hole with Will Gordon and MacKenzie Hughes, a few hundred yards away at the 10th tee, at the exact same time, Jason Day was started his round all by himself, not knowing whether he was positive or negative.

The result came in a few holes later. He was negative; had he been positive he would have been removed from the course midround and put into isolation.

Shortly after the PGA Tour announced his negative result, it announced another change to the protocols, their second such announcement in four days. Going forward, beginning at the Rocket Mortgage Classic, players would not be allowed on site at an event until they got back a negative test result.

No, none of this was ever going to be easy. So each week, the Tour will learn and adjust, along with the players and caddies and staff and the rest of the watching sports world.

And this week — the continued silence, the seven withdrawals, the two different players out on the golf course all by themselves, two separate announcements of changes in protocol — served as reminders of that simple, undeniable truth.

Wu, Im tied for lead at storm-delayed Wyndham
Gary Player calls out son Marc on social media for trying to auction memorabilia without consent
It has been a while by Inbee Park’s standards, but the seven-time major champ is lurking at Women’s British
Here’s the prize money payout for each golfer at the 2022 Wyndham Championship
Chun takes halfway lead at Women’s Open