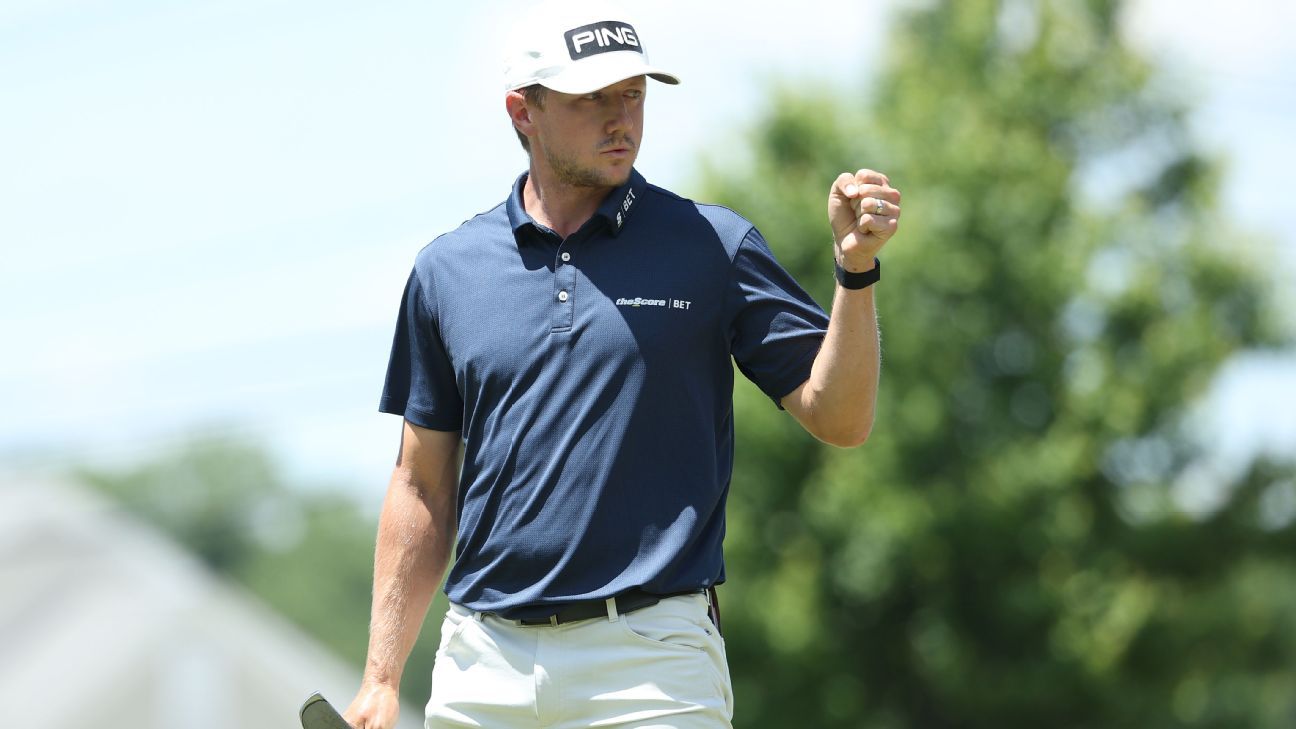 CROMWELL, Conn. — Mackenzie Hughes shot a career-low 60 Thursday to take the first-round lead at the Travelers Championship as the PGA Tour tried to switch its focus back to golf amid growing concerns about the coronavirus.

Hughes, a 29-year-old Canadian, had a chance to shoot the 12th sub-60 round in PGA Tour history, but his 40-foot birdie attempt on his final hole came up short. Jim Furyk shot a 12-under 58 on the same TPC River Highlands course four years ago, the lowest score in a tour event.

“I kind of joked walking off there that 59 wasn’t even the record because of Jim’s 58,” Hughes said. “It’s probably not even that special around here. But as a personal milestone it would have been neat.”

It was good enough for three-shot lead over Rory McIlroy, Xander Schauffele and Viktor Hovland, who each shot 63 on a day of low scoring.

There were 106 players who broke par. The record for a day at TPC River Highlands was in 2011, when 111 players were 1 under or better in the second round.

Hughes’ bogey-free round included a 30-foot birdie putt on his second-to-last hole, the par-3 eighth. Patrick Cantlay was the most recent player to shoot 60 at TPC River Highlands, as an amateur in 2011.

McIlroy, who also started on the back nine, eagled the par-5 13th and followed with two consecutive birdies. He made four more birdies on the front nine for a 31.

“It’s just been nice to get back into some competitive golf again,” McIlroy said. “You know, it doesn’t feel the same because you’re not having thousands of people reacting to your birdies and getting that going. I felt the weekends have been a little flat for me just because that’s when you’re in contention and that’s where you sort of start to feel it. Thursdays and Fridays don’t feel that different to be honest, but into the weekends they do.”

Mickelson learned earlier Thursday that he was granted an exemption into this year’s U.S. Open for being in the top 70 in the world on March 15, when golf was shut down because of the coronavirus pandemic.

“That worked out great, to be able to know that I have a chance to go back to Winged Foot and give it another shot,” said Mickelson, who finished second at Winged Foot in 2006 after a double bogey on the 72nd hole. “But I’ve had 30 U.S. Opens. I’ve had plenty of opportunities, and so if I don’t qualify, I want somebody else who deserves a spot, too, to play. As long as I’m playing well enough to compete to earn my way into the field, then I want to play and keep trying to win that tournament.”

Schauffele and Hovland were the best among the afternoon wave. Schauffele was 8 under through 16 holes but missed a 7-footer for par on the 17th.

“The greens firmed up a little bit,” he said. “The wind, just a little bit of wind can make any course hard, so in terms of hitting it really tight, it got a little trickier late in the day.”

Hovland made a sloppy bogey on 17 but rebounded with a wedge to 4 feet on the par-4 18th for birdie.

Abraham Ancer, the runner-up at last week’s RBC Heritage, aced the 155-yard 16th. His 8-iron landed just over the pond guarding the green and rolled 6 feet into the hole.

“It was very anticlimactic because there was nobody out there and we couldn’t high-five or anything, but still, it was awesome to have my first PGA Tour ace,” said Ancer, who shot 67.

The run-up to the tournament was consumed by news about the coronavirus and questions about how long the tour can continue after two players — Nick Watney and Cameron Champ — and the caddies for Brooks Koepka and Graeme McDowell tested positive. Those were the only four positive tests among the 1,382 conducted by the tour since its return.

Players who test positive are required to withdraw. Koepka, his brother, Chase, McDowell and last week’s winner, Webb Simpson, withdrew because of concerns about the virus. The Travelers is the third event on the tour calendar since golf resumed.

The withdrawals opened the door for alternates including Tyler McCumber, who arrived Wednesday night from his home in Florida and shot 65.

McCumber missed the cut on the Korn Ferry Tour last week and then went camping for a few days in North Carolina’s Pisgah Forest.

“I got back Tuesday, thinking that I had no chance of getting into the tournament, and then got the call from the tour about the option of possibly getting up here,” he said.

Wu, Im tied for lead at storm-delayed Wyndham
Tom Kim’s unreal bounce back, a journeyman’s career low and gut-check time for Rickie Fowler
Watch an emotional Nick Faldo struggle through tears as he signs off after 16 years as CBS’ lead golf analyst
This Simple Move IMPROVES Every Golf Swing – You Feel Great Ball Striking INSTANTLY
It has been a while by Inbee Park’s standards, but the seven-time major champ is lurking at Women’s British