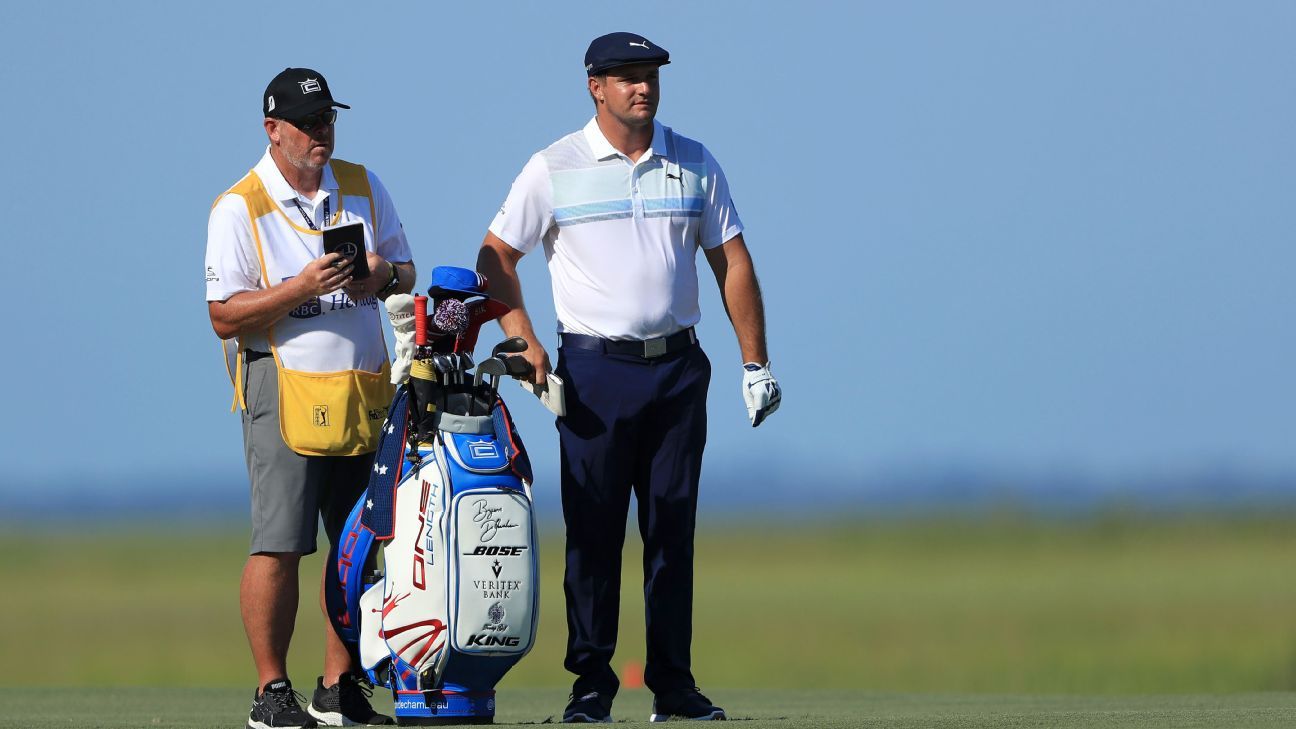 HILTON HEAD, S.C. — In addition to all of the physical benefits that Bryson DeChambeau is enjoying after a months-long process that has seen him add 40 pounds, perhaps the best one has nothing to do with golf.

Specifically, the ability to eat, well, as much as possible.

“I eat whatever I want, whenever,” DeChambeau said Friday.

So far, DeChambeau is devouring golf courses as well, adding a 64 during the second round of the RBC Heritage to a run of good golf that has seen him go 25 under par in six rounds

He heads into the weekend at Harbour Town Golf Club with another chance to win after missing a birdie putt on the final hole this past Sunday that would have put him in a playoff at the Charles Schwab Challenge.

It’s all part of a plan that DeChambeau put in place last fall to gain more muscle and get heavier with the idea of increasing his swing speed and hitting the ball farther.

In an era where strength is encouraged but not necessarily to the point of bulking up to big levels, DeChambeau is shattering a few myths and pummeling the ball to great effect.

DeChambeau, 26, used the three-month break due to the coronavirus pandemic to gain another 20 pounds by constantly eating and working out. He had put on approximately 20 pounds in the fall and is up from 195 last year to around 235 — and it not averse to gaining more.

“The distance gain has helped me hit 9-irons and pitching wedges compared to 7-irons and 6-irons into holes,” DeChambeau said after his 64 left him a shot behind Webb Simpson. “That’s a huge change for me that’s allowed me to go and attack flags a lot more, be more aggressive, not really have to try and fit into this little spot down on the fairway out here and really attack those flags.

“So I feel like for me my game after quarantine, the distance has really put it to a whole new level for me.”

DeChambeau has been eating his fair share, but it’s also been about better and longer workouts. The five-time PGA Tour winner said he basically spent all of his off time during the three-month PGA Tour shutdown in the gym, on the range or downing protein shakes.

Last week, DeChambeau averaged 340 yards off the tee at Colonial, and he presently leads the PGA Tour in driving distance at 323.8 yards.

And it’s been difficult for those in the game to not take notice.

“What’s impressive is how straight it’s going,” said Davis Love III, who in his prime was considered one of the longest drivers on tour and played with DeChambeau the first two rounds. “He not only got longer, but he got straighter, and it looks like it’s under control, and it actually looks like it could go farther if he didn’t try to make sure it went straight.

“With Trackman [a tracking device], with the training, with putting a lot of thought into it, you can figure out a way with your body and your swing to pick up some distance and still hit it straight. Technology and good thinking is helping these guys get longer and straighter.”

Rory McIlroy, one of the longest off the tee in the game, played with DeChambeau during the final round at the Charles Schwab Challenge.

“At the start of the year he came out and he was a bit bigger,” McIlroy said. “You could see he was getting a bit of speed and stuff, and he was hitting it a long way. But he hit a couple of drives on Sunday that [caddie] Harry [Diamond] and I just looked at each other, and we’re like, ‘Holy s—, that was unbelievable.’

Well, what exactly is he doing?

“It’s a two-to-one carb-to-protein ratio, and I literally just have at it,” he said. “I eat whatever I want whenever. Obviously, I’m trying to control the intake of sugars, but carbs are fine because I’m obviously sweating like crazy out here. So I just eat as much as I want right now. It’s nice. And I don’t gain weight. I actually lose weight, I’ve lost a little bit of weight this week.”

And that’s just part of it, DeChambeau said. The time in the gym has been as important as the caloric intake.

“It’s a lot of muscle,” he said. “People don’t believe me when I say it, but you don’t understand my work ethic at that point if you’re thinking it’s not muscle. And I know there’s a limit to how much you can gain.

“This is my first year of actually working out super hard. I know in a year you can gain around 30 pounds, and that’s kind of what I’ve done in a shorter period of time. I haven’t taken rest days off. I’m literally working out every single day as hard as I can.”

DeChambeau is known for his eccentric ways going back to college at SMU, where he won the NCAA title as well as the U.S. Amateur. Known as “The Mad Scientist,” DeChambeau gained notoriety by playing with one-length irons; all of his irons are the same length as a 7-iron, a system nobody else at this level employs.

He can often be seen with an entourage of people when he practices, trying to maximize every technological advantage.

This latest endeavor will be watched with great interest.

“It’s been really impressive to see what he’s done over, say, the last year or so with his transformation and obviously some serious gain in speed and power,” Rickie Fowler said. “But it will be interesting to see where the peak is. Where does it become almost counterproductive as far as too much speed, where [shot] dispersion becomes too great? There has to be some sort of peak in there.”