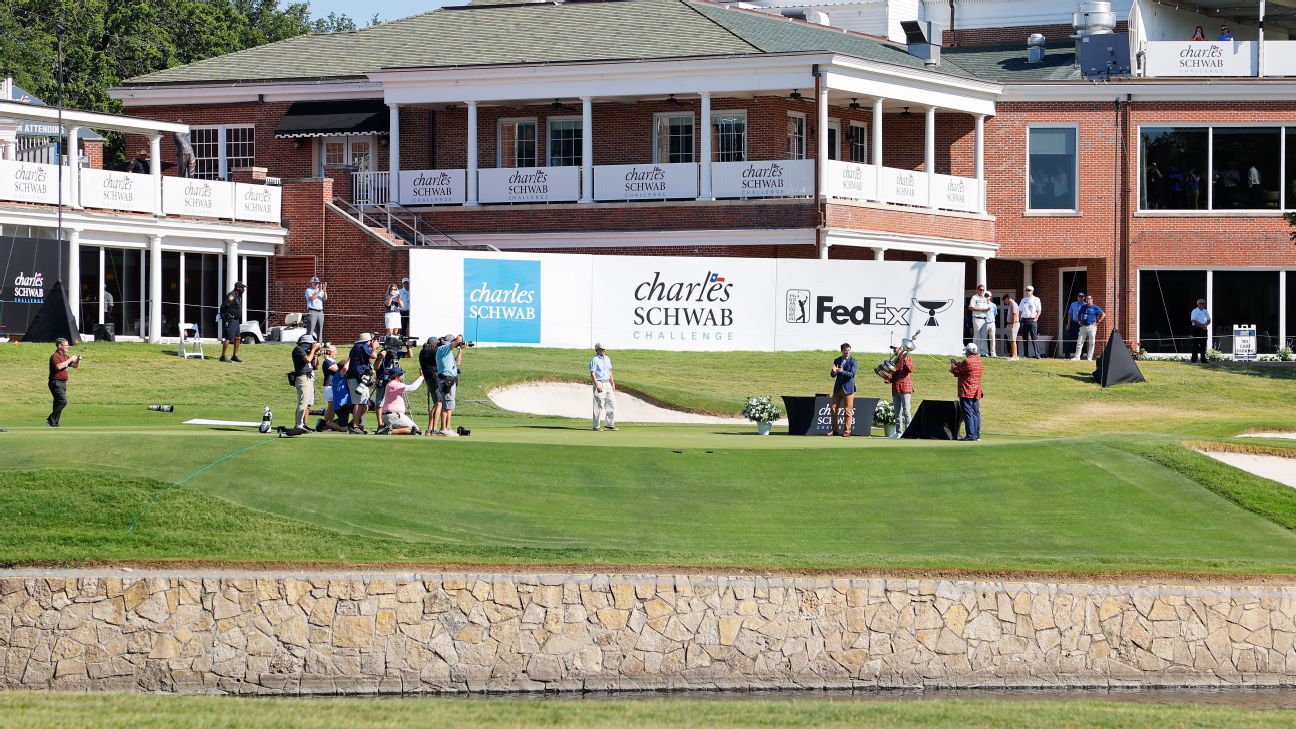 What were our biggest takeaways from the first week back? What do we expect going forward? We asked Todd Archer, our on-site reporter this week at Colonial Country Club, and some of our watching-from-home golf experts to weigh in:

1. What was the biggest thing we learned from golf’s first week back?

Todd Archer: I’m coming at this from a football perspective as our Dallas Cowboys reporter, so bear with me, but these guys are good. After a three-month layoff, golfers thought there would be some rust. Yes, some were rusty, but the quality of play did not seem to suffer. The play down the stretch wasn’t perfect, but it certainly was exciting, even if it wasn’t Jordan Spieth or Rory McIlroy leading the way. Given the lack of live sports since March, the drama has to mean something. The more they play, the better they should get, so if they can continue to avoid issues with the coronavirus, the rest of the season could be special.

Bob Harig: Golf can do this. Despite the challenges of a global pandemic, a sport that inherently has distancing and is not played with a shared ball can proceed in these unusual times. This was an excellent first tournament back, and tweaks can continue to be made to assure a safe environment with a competitive atmosphere.

Michael Collins: Golf doesn’t need fans for drama. Golfers don’t need to be miked up with no fans; just keep the on-course mics on, and we’ll hear everything just fine. It started with a Brooks Koepka F-bomb, which, let’s be honest, is just what everyone was hoping for. It looks like the sky didn’t fall. I won’t say I told you so, but …

Nick Pietruszkiewicz: Social distancing is going to be harder than we thought in golf. The general consensus was that this is an outdoor sport, so it’ll be pretty easy. Maybe for you and me during a casual round, but not so much for Tour players with a ton at stake. The players handed their clubs back to their caddies over and over; that was supposed to be a no-no. Rules officials got pretty close without wearing masks. Fist bumps happened regularly. Overall, this week proved that golf was ready. It should be back. But some of the adjustments are going to take longer than we think.

2. What’s the biggest thing that will take some getting used to in the “new normal”?

Archer: How can it be anything except having no fans in attendance? Imagine what the scene on Sunday would have looked like with the playoff between Daniel Berger and Collin Morikawa if they played No. 18 with fans ringing the fairway and the clubhouse balcony packed. Imagine the roars over the big shots that led to a playoff or the groans over missed short putts, such as the one that cost Morikawa from extending the day to a second playoff hole. There were some fans, even if they were not on the course, and the players appreciated even the smallest of cheers or acknowledgements. It will be interesting going forward if fans at some of the upcoming events are able to be as creative with their setups. If you live near a course, you have to have at least some appreciation for the sport, so this could become something of a “new normal” before a limited number of fans are allowed in at the Memorial.

Harig: No spectators. The golf was excellent anyway, but it’s so strange to have no cheering of good shots and no moans over bad shots. It’s a bit eerie. Although having golf back in this manner is better than having no golf at all, it is quite possible that a lack of spectators over the next month will get old.

Collins: Watching golf with no grandstands is what I imagine watching football in an open cow pasture was like. As a guy who caddied on tour and played courses while the grandstands were up, the depth perception is a lot different. I think the stands make holes a little easier for pros.

Pietruszkiewicz: You can hear everything. That’s a good thing, but it’s a little jarring at times. Most people who pay even a little attention to golf already knew that Spieth never stops talking, but to hear the constant dialogue — “Get up!” “Get down!” “Nooooo!” “Oh, Jordan, that is so bad” — you realize maybe he isn’t that much different than the rest of us on the golf course. He is talking to his ball, his caddie, himself. It doesn’t matter if anybody is listening to him. But he isn’t alone. We’re going to pick up all kinds of things that we won’t hear once the gates open again. We’ll get a few F-bombs. We’ll get candid conversations among players and caddies because they forgot that, hey, we can hear you. It’s different, but it’s also great.

3. Is there anything you’d change?

Archer: That’s difficult to say. After spending every day on the course from Tuesday through Sunday, there was never a feeling of being unsafe. Everybody on site was given a thermal screening before entering. The players felt safe because none of the nearly 500 people “inside the bubble” tested positive for COVID-19. Without fans, I was able to hear the back-and-forth between Jordan Spieth and Michael Greller on a second shot from behind some trees on the fifth hole. It was fascinating. If there’s something to change, maybe it is to get these guys miked up.

Harig: There has to be a way to fulfill advertising obligations and not break up the golf so much. It is one of the biggest complaints of golf fans: not enough continuity and too many commercial breaks. Bills have to be paid, and ad breaks are a necessary part of sports on TV, but it was maddening at times.

Collins: We need “Vent Cam” — with the promise of no consequences. Set up three cameras and mics: walk-off after the fourth green, between the ninth green and 10th tee, and coming off the 15th green. We want players to be allowed to walk up to a camera and mic to say what they want during crucial points of their rounds.

Pietruszkiewicz: Honestly, not much. I worry that because so much audio was picked up this week, some of it will be silenced going forward.

4. What was a pleasant surprise, something you didn’t expect or thought you wouldn’t like but did?

Archer: That there were some fans in attendance — at least, sort of, anyway. Fans did what they could at various points of the course to get a glimpse of the golf. One couple sat behind the second tee with a cooler and could not have been happier. The grandstands that some homeowners built were great to see. With the setups at other courses maybe being a little more forgiving, perhaps we’ll see and hear more fans in the coming weeks.

Harig: These guys were ready to go. They couldn’t wait to play. The strength of the field said as much before they hit a shot. Then you saw it inside the ropes with some excellent golf by a lot of players who got into contention.

Collins: I know because of social distancing that I should not have been a fan of the grandstands built across the street from the 16th tee (with a view of the 15th green), but watching players react to those fans was fun, and I secretly enjoyed it.

Pietruszkiewicz: I’m with these guys: I didn’t expect the players to be this ready to go this soon. Sure, golf was one of the things largely allowed while most other activities outside your house were halted. No fans might have made it less nervy, too. But there’s still millions on the line and tournament conditions, both of which make it different than a regular cash match at the club. But these guys were dialed in from the first tee Thursday morning. That was surprising — and important — because with more eyeballs on the product than usual, a compelling event helped everybody.

5. It has been only one week, but which player is headed for big things in the rest of this condensed 2020 schedule?

Archer: I feel a little bit better analyzing Dak Prescott, given my other job here at ESPN, but I’ll play along. I want to say Bryson DeChambeau because he has added so much strength, and it was stunning to see how hard he swung at everything. But I’ll go with another guy whose weight was talked about — the other way. That’s Gary Woodland, who dropped 25 pounds. He stumbled a little on Sunday, but the U.S. Open winner looks like he has a game that will get better the more he gets used to his body.

Harig: Collin Morikawa. Missing that putt in the playoff with Daniel Berger will sting, but Morikawa’s pro career is off to a great start, with 21 consecutive cuts made on the PGA Tour, a victory and now a runner-up finish. He didn’t win, but Morikawa already seems much better than his world ranking of No. 27 suggests.

Collins: Bryson DeChamWHOA! The guy who has been told his whole career, “You can’t do that. It doesn’t fit. It won’t work.” DeChambeau is going to do this year what Bubba Watson did after his first Masters win: Make people cancel a lot of lessons.

Pietruszkiewicz: Morikawa was on our minds before this week started. He could win multiple times in this condensed schedule. Also, the bulked-up DeChambeau has been nonstop theater during quarantine. Now, trust me, I am not against picking Justin Thomas every single week and taking my chances. But Xander Schauffele was poised for a breakout 2020 before the long break. He did nothing to suggest that he is not going to make serious noise — and perhaps be even a bit more motivated after his near miss this week.

How to watch PGA Tour’s FedEx St. Jude Championship on ESPN+
My BEGINNER GOLFER Wife Learns The BASICS FROM A TOUR COACH!?
As storms hit Wyndham, playoff hopes hang in the balance amid a crowded leaderboard
PGA Tour files to keep LIV golfers out of FedEx
Judge rejects LIV trio’s bid to play in FedEx Cup