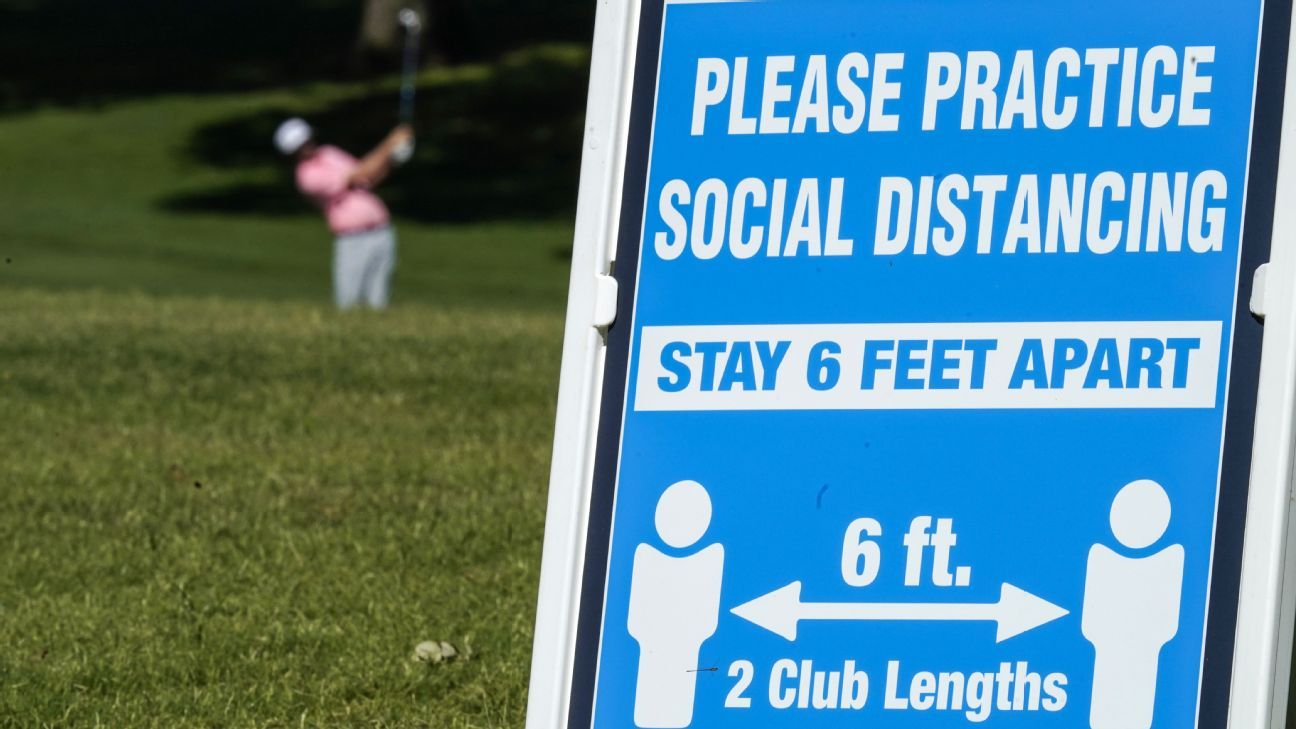 FORT WORTH, Texas — Eleven people gathered behind the second hole at Colonial Country Club on Thursday for the first round of the Charles Schwab Challenge.

Because of the coronavirus pandemic, fans were not allowed, but this group did not want to take no for an answer, especially as the top three ranked players in the world of golf — Rory McIlroy, Jon Rahm and Brooks Koepka — approached.

Some strained to see over the hedges along Colonial Parkway. Others pressed right up against the chain-link fence.

In one of the few cheers of the day, one guy yelled, “Let’s go, Rory!” as McIlroy walked after his tee shot.

Justin Rose and Harold Varner III are tied for the lead after the first round at 7 under. McIlroy, Koepka and Rahm shot 68, 68 and 69, respectively.

But Thursday was not just about the leaders; it was about the scenes surrounding the PGA Tour’s first event since March.

How it started … again

At 6:50 a.m. local time, Kip Adams, the Colonial Country Club president — clad in the club’s signature plaid jacket that the champion will earn Sunday — stepped to the first tee to announce the opening group that included Ryan Palmer, Brian Harman and Bill Haas on the first tee.

Palmer is a member of Colonial and lives not far from Fort Worth. On the 10th tee, J.J. Henry, another Colonial member, and Tom Hoge, who played at TCU, hit the first tee shots for groups going off the back nine.

“I was a little nervous, obviously, but very exciting. I’m honored that they asked me to do it,” said Palmer, who finished 2 over. “I’m proud to be a member of this great club in Fort Worth, Colonial, and I’m pretty honored to be asked to hit the first shot for the return to golf, for sure.”

As Adam Hadwin, Harris English and Christiaan Bezuidenhout walked off the first tee, PGA Tour commissioner Jay Monahan stepped forward, preparing for the 8:46 a.m. moment of silence in remembrance of George Floyd, who died while in police custody in Minneapolis on May 25.

A pause in the Return to Golf, at 8:46 a.m: pic.twitter.com/wqmuZPgYOa

After three horn blasts, golfers stopped along the course, driving range and putting green. Many of them bowed their heads. Most also removed their hats. On the putting green, Minnesota native Tom Lehman, one of the oldest players in the field at 61 and a Champions Tour member, prayed.

“I think everybody needs to feel deeply what happened and to hurt deeply because of what happened to George Floyd,” Lehman said. “I think everybody needs to understand that when you have an absolute disregard for the suffering or pain of somebody else or the death that you cause on somebody else, if you have no regard for that, you are a part of the problem and you need to get your s— together.

“I would say that’s probably the thing I took away from it is let’s just understand that we’re all human beings and need to care about each other. If you can’t do that, then I feel sorry for you.”

Rose was on a course that was quiet already without fans.

“Sometimes when you have thousands of people and there’s that momentary pause, I think you feel the energy and the gravity of the situation more, but I think, obviously, it’s a very personal moment right now to reflect on your life, how you go about your life, how you live your life and how inclusive you are in your own life with everybody you come across,” Rose said. “I guess everything that’s going on right now in the world, there definitely seems to be hopefully an opportunity, and the momentum that is obviously created right now, that’s what I was reflecting on, really, is just how widespread this has become. This has become much bigger than the U.S., as well, which is good to see.”

Leading into the first round, players knew this would be a different week with no fans in attendance. Dustin Johnson likened it to his junior golf days. Rahm harkened back to college golf. Bryson DeChambeau talked about playing U.S. Open qualifiers.

Maybe because it was roughly 7 a.m. local time, but Harman learned early this would not be a typical day. After nailing a putt of nearly 52 feet for par on the par-5 first hole, there was no applause. Harman did not make a peep, either.

“The only comment I made to [Haas] is, like, you can hear people hitting tee shots around the course,” Harman said. “I had to back off a couple putts because someone hit a tee shot. I was like, I don’t remember being able to hear that here. There’s usually a wall of people in between here and there, so you don’t hear that kind of stuff. The sound travels a lot worse. It’s odd to see the place with no fans. It’s definitely different.”

On the par-3 16th, Johnson hit his tee shot to within 2 feet. Silence. Playing with DeChambeau and Rose, the group all made birdie putts. More silence, although DeChambeau waved either facetiously or instinctively when his putt dropped. After a birdie on No. 8 in the afternoon, Rickie Fowler looked to his right and waved and did the same to his left. There might have been a smattering of officials following his group with Justin Thomas and Jordan Spieth. Sung Kang had a hole-in-one, and it was met with silence.

“I told my caddie early on, I didn’t feel like I was hitting it as far because my adrenaline wasn’t up,” said U.S. Open champ Gary Woodland, who played with Phil Mickelson and defending Colonial champ Kevin Na. “It’s a big deal. Especially when you play with Phil and you get some of those big groups — you get so much adrenaline, the golf ball seems like it goes miles. It felt like kind of a practice round out there, same kind of energy. But it was kind of peaceful, kind of going back to college days, and you kind of roll with it and stay within yourself a little bit more, and you really don’t get distracted.”

There was one “roar” for the day — if it qualifies.

At a house tucked just off the course, a makeshift grandstand was made for a group of fans that grew as the day went long. When Spieth curled in a 22½-foot putt for birdie to get to 4 under, the fans gave a cheer that was as loud as any heard all day.

But for the most part, the round was played in almost silence.

Much was made of how players and caddies would deal with social distancing because of the coronavirus pandemic. The PGA Tour offered up guidelines, like saying the players should pull clubs and caddies should wipe flagsticks and rakes, and offered a reminder to the players after the first practice round.

Habits can be hard to break, which is why McIlroy asked for leeway from folks watching on television if they saw players too close or not following all of the protocols.

Rose’s caddie, Gareth Lord, held a wipe in his hands as he raked the bunker and replaced the flag on No. 17. Other caddies held flags with towels covering their hands. At least one caddie was wearing a mask, complete with a Los Angeles Dodgers logo.

Johnson was one of the players seen pulling his own club from his bag, but that seemed to be the one habit players had a difficult time breaking.

“We’re trying to follow the guidelines, but it’s amazing how routine and what you’ve done for 20 years kicks in, and you’ve got to keep reminding yourself,” Rose said. “Definitely, I’m sure we all made a couple of mistakes out there, but we’re definitely very conscious of what we touch personally and therefore who touches that next and how that’s dealt with. I think, obviously, all the caddies are trying to do a good job with the flagstick because, obviously, that impacts the whole field, raking the bunkers and what have you.

“Obviously, I’m staying with my caddie — we’ve been in close proximity and kind of living in a little bubble together, so whether that be touching the golf clubs with a towel, I’m kind of relatively comfortable with that, but we’ve got to be cognizant of other people. Every surface you look at now, you’ve just got to kind of treat it as an unknown. It’s interesting. But we’re definitely doing our best to play by the guidelines, for sure.”

PGA Tour says LIV members seeking to play in FedEx Cup are ‘fabricating an emergency’ and knew they were breaking the rules
A week of firsts at Muirfield includes this special one for the Honourable Company of Edinburgh Golfers
Sean Foley on How to Get the Correct Backswing Sequence | Golf Lessons | Golf Digest
Golf Swing – Improve Your Pitching Distance Control
Wu, Im tied for lead at storm-delayed Wyndham