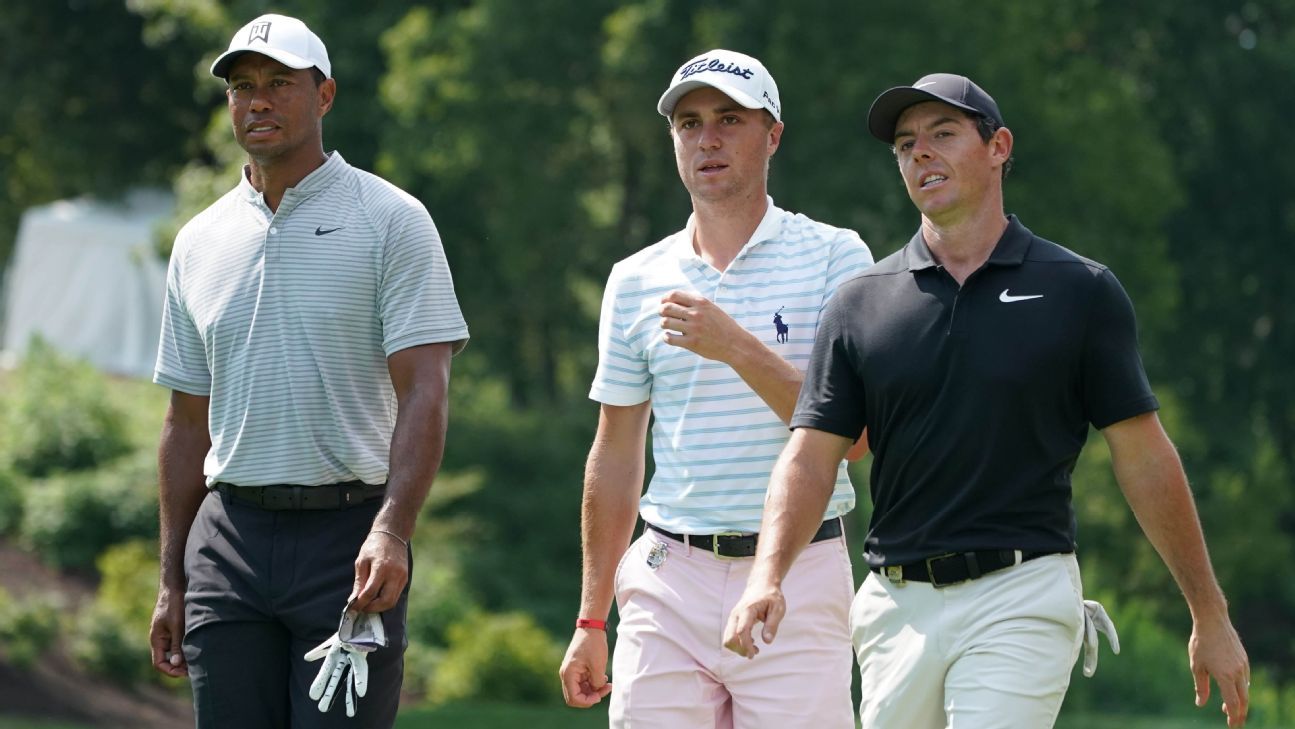 After a long break because of the coronavirus pandemic, golf makes it return this week at the Charles Schwab Classic. The field is loaded, well, except for the biggest names — Tiger Woods is sitting this one out. When will he make his debut? We’ve had a few guesses.

Still, this week, the stars are out for the first time since The Players, which was canceled after the first round back on March 12.

So we gathered a panel of experts to break down what is to come in a condensed, major-filled 2020 schedule. Sure, there are the Official World Golf Rankings, just like there are standings in the NFL, NBA and Major League Baseball. But we asked our group to look beyond those numbers and figure out who was playing well before the shutdown, who is poised to make a big run and which breakout stars are ready to announce themselves.

Here’s what we came up with:

McIlroy was on a roll when the golf world shut down back in March. See if this run, from October through the Arnold Palmer Invitational, the last full event before the stoppage: T-2, T-3, win, T-3, T-5, fifth, T-5. It doesn’t count, but throw in that he won the TaylorMade Driving Relief event with Dustin Johnson, beating Rickie Fowler and Matthew Wolff, with a closest-to-the-pin clincher. OK, yeah, that might be stretching it, but he was good before golf stopped, no reason to think he won’t be that good once things get going again.

After a successful cameo as an on-course reporter for The Match: Champions for Charity, when Thomas offered commentary and heckled Tiger Woods, Peyton Manning, Tom Brady, Phil Mickelson and broadcast colleague Charles Barkley, Thomas returns to his full-time job. He had high hopes for the usual April version of the Masters; he won Sentry Tournament of Champions, finished third at the Waste Management Phoenix Open and T-6 at the WGC-Mexico Championship. Sure, he had two missed cuts spinkled in, too, but look at the long range — since September, aside from those two missed cuts, he never finished outside the top 20.

So, Rahm had the temper under control before golf’s long break. That’s what happens, apparently, when you have two runner-up finishes and T-3 and nothing worse than 17th in six starts. Maybe a spot lower than his official ranking will bring out the fire? But the world’s best young player — he’s just 25 — could be poised for a big, big year in this short, condensed schedule.

Koepka is probably not going to like this. He tends to remember any slights. But our cast probably took a look at the state of his game before the hiatus. In three events in 2020, he had one missed cut and two finishes outside the top 40.

Let’s forget how Johnson looked carrying his own bag in the match with McIlroy, Fowler and Wolff. He appeared as if he’d never lugged the thing around on his own in his life. Thankfully, for him, his brother, Austin, will be back on the bag as real play resumes. In four 2020 starts so far, he posted two solid finishes (T-7 at Sentry Tournament of Champions; T-10 Genesis Invitational) and two so-so weeks (T-32 at AT&T Pebble Beach and T-48 at WGC-Mexico).

Reed’s season had been a wild ride: Improving his lie in December in the Bahamas; his caddie, Kessler Karain, has a run-in with a fan at Presidents Cup, an event in which Reed played poorly aside from his singles match; the calls of him being a cheater that followed him from event to event; one win, at the WGC-Mexico and three top 15s or better. Whatever comes next, don’t expect it to be boring. It never is.

The most important question is this: What will he look like? DeChambeau was on a bulking-up plan before the shutdown. He had put on 25 pounds and got into a back-and-forth with Koepka over who had better abs. With all this time off, what has he been up to? Well, there is this:

Schauffele is in the conversation of the best young American players. He was in the mix down the stretch at the 2019 Masters before doing what so many did before him — watch Tiger Woods win. He finished second at last year’s Tour Championship, and it carried over into the 2019-2020 season — two top-five finishes, five top 20s and eight top 25s. We’ll just ignore that missed cut at the Farmers Insurance. Everybody is allowed a bad week.

His resumed season will start a little later than some of the others. Scott, who returned to Australia, has said he won’t come back to play in the U.S. until July. He’s not alone; Lee Westwood will also take more of a wait-and-see approach before resuming PGA Tour play. Scott already has a win in 2020, coming at the Genesis Invitational.

Trying to predict anything about Woods is not easy — when he’ll play, how he’ll play, what kind of condition his body will be in, what will be his facial hair situation. He looked good in the charity match, in not-so-great weather conditions, with Manning, Brady and Mickelson. But, remember, before the shutdown, he had a stiff back and hadn’t played since a last-place finish at the Genesis in mid-February. As usual, he has been tight-lipped about his schedule. So every Friday, as another tournament entry deadline arrives, everyone will look and wonder if this is the week.

Todd Archer reports on the latest from the PGA Tour as it gets ready to return from a three-month break due to COVID-19.

Let’s see. Simpson has pretty much everything covered since the 2019-2020 season started — a win at Waste Management Phoenix Open, second at the RSM Classic and third at the Sony Open. In fact, the last event he played in — the WGC-Mexico in which he finished T-62 — was the only event he’d finished outside the top 17.

Whenever there is debate about the big, major breakout star among young Americans, the conversation will have Cantlay in it — usually alongside Schauffle, Tony Finau and DeChambeau. Like Simpson, he was rolling along before the shutdown – a couple top 5s and a bunch of top 20s. In fact, since September, he was no worse than 17th, too.

Finau’s 2019-2020 season had been a mixed bag with a couple of missed cuts and a couple of finishes outside the top 50 sprinkled amid four top 15s. Over the break, along with working on his game, he has clearly been working on his moves.

There’s no way around this: The results were pretty bad for Rose. In four events before golf stopped, he missed three cuts and finished 56th at the Genesis. When he heads back out, he’ll be trying something different. Rose parted ways with his equipment manufacturer, Honma, recently.

Fleetwood’s search for his first victory on the PGA Tour will have to wait a bit longer. Fleetwood, who went home to England when the sports world was put on pause, has decided to remain there a bit longer instead of returning to the PGA Tour.

In a normal world, Woodland would have been gearing up for his U.S. Open title defense, which would have happened two weeks from now. But with the revised schedule, that’ll wait till mid-September at Winged Foot.

Leishman won the Farmers Insurance in February and, in the final event before the stoppage, finished second at the Arnold Palmer behind Tyrrell Hatton.

He had been playing a lot of golf, posting six events and was in the midst of a seventh at The Players. He had four top 20s and two top 10s before a T-56 at the Arnold Palmer.

In a vacuum, this seems like a fair spot for Sungjae Im. It’s close to his OWGR spot. But hang on, let’s remember what he was doing before the pause button was hit. He won the Honda Classic, then finished third at the Arnold Palmer the next week. Maybe 19 is a little too low?

You always expect to see Fowler’s name higher because, well, he’s Rickie Fowler. He won last year at the Waste Management, but that was his first and only victory since 2017. In the forced down time, he did get one big win — knocking off Justin Thomas in a left-handed match.

Kuchar closed Mayakoba with a 62. He was in the mix at the Sentry Tournament of Champions and Waste Management. He was T-2 at Genesis. The missing piece might be his iron game — he’s 104th in the world in greens in regulation and 156th in proximity to the hole (38.5 feet).

It wasn’t an easy road to get back to playing golf or getting back into the United States. But, as chronicled by ESPN’s Bob Harig, Fitzpatrick is here and ready. At 25, he has five international wins. Like Fleetwood, he’s still searching for that first PGA Tour win.

If you’re only as good as your last outing, then Hatton should be No. 1 on the list. He won the last completed event, the Arnold Palmer Invitational, for his first PGA Tour victory.

The Players was canceled after one round. Oosthuizen didn’t make it that far. He pulled out of the event after a couple holes because of a shoulder injury. He’s back ready to go this week at the Charles Schwab Challenge.

One of the better iron players on the PGA Tour, putting is usually what stands in the way of a high finish and not. Casey is 215th in the world in strokes gained: putting and 221st in total putting.

Lowry will be the defending Open champion a bit longer, with this year’s event canceled. It is the one among the four majors that won’t be played in 2020.

Ancer might be most known for saying he wanted a piece of Tiger at the Presidents Cup. Well, maybe he didn’t say it exactly like that, but that’s how Tiger took it. But he’s got game — he had a run of three top 10s in four events at the close of 2019 and the beginning of 2020, and a 12th-place finish at the WGC-Mexico.

The first on the list of the next generation. Clearly our panel is expecting big things and ignoring Hovland’s spot on the world rankings list, though that is largely because of his lack of starts on the PGA Tour. Hovland won the U.S. Amateur in 2018, at Pebble Beach. He finished T-12 at last year’s U.S. Open, also at Pebble Beach, with the lowest score ever by an amateur. And he also already has a PGA Tour win, with a victory at the Puerto Rico Open. He’s here.

The swing stands out. Need a reminder? Well, here you go:

Like Hovland, Wolff already has a Tour win. A few weeks ago, he was on the big stage, playing in a charity match alongside three guys with far bigger name recognition: McIlroy, Fowler and Johnson. So, sure, he’s 110 in the Official World Golf Rankings. But it’s only a matter of time.

The 2014 FedEx Cup champion has four top 10s on the PGA Tour in the 2019-2020 season. The key is the first round: Only once has Horschel finished outside the top 25 after opening with a number in the 60s since October.