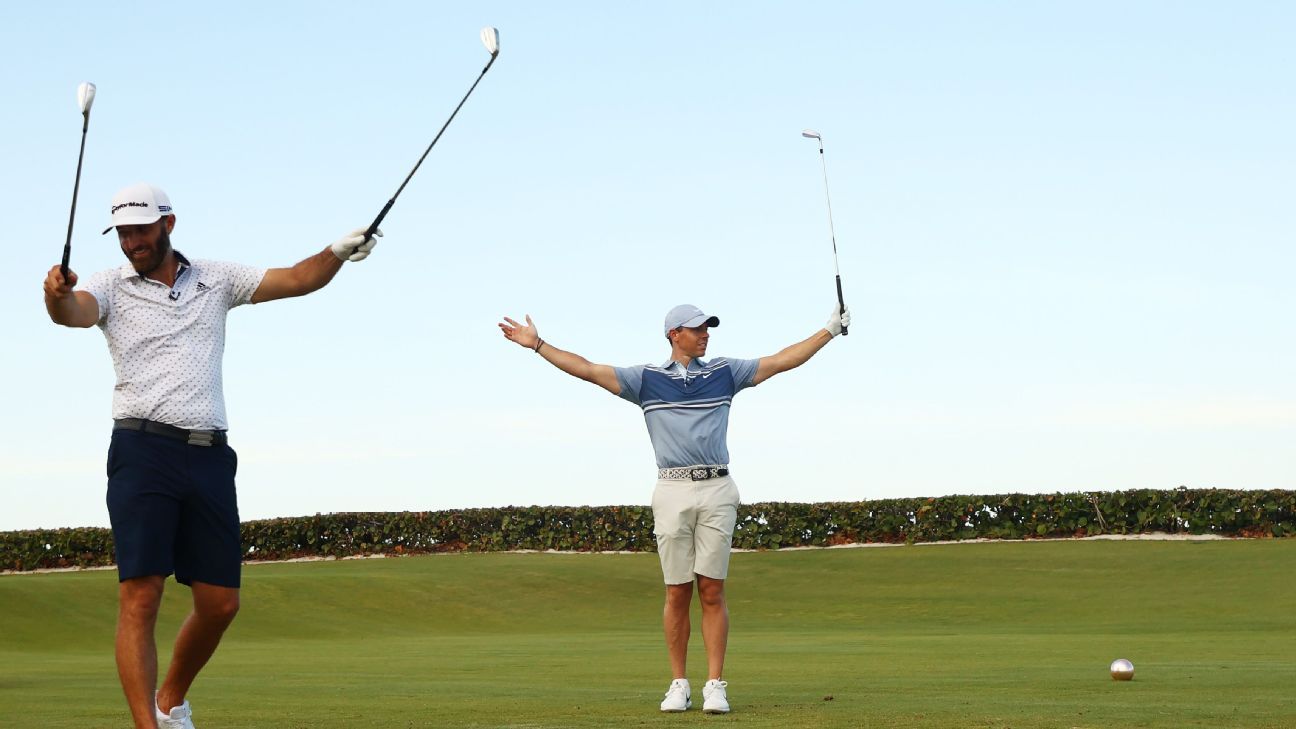 For the first time in 90 days, PGA Tour players are gathering at a golf course to continue preparations for a tournament that begins Thursday and will be the first played since the coronavirus pandemic halted sports across the country.

On March 12, the first round of the Players Championship was played in front of spectators, with the tournament canceled that night.

The Charles Schwab Cup was supposed to be played three weeks ago but has taken the spot as the first tournament in the revised schedule that is supposed to go through early December.

With Colonial set to take center stage, here is what you should know.

In a word: loaded. Colonial hasn’t seen a field this strong since the Official World Golf Ranking began in 1986. The tournament has attracted the top five players in the world, including No. 1 Rory McIlroy, and eight of the top 10. Only Adam Scott and Tommy Fleetwood — both of whom are residing outside of the country and would face quarantine in the U.S. — are not playing. Normally an invitational with 120 players, the field has been expanded to 144.

Colonial Country Club in Fort Worth, Texas, is a history-filled club also known as “Hogan’s Alley” because of the success Hall of Fame golfer Ben Hogan had there. He won the Colonial event five times, including his last tour title at age 46 in 1959. The tournament was first played in 1946 and is the longest-continuing non-major event at the same venue on the PGA Tour.

Sungjae Im was the hottest player in the world when golf was halted. The South Korean opened the Players Championship with a 63 at TPC Sawgrass before the tournament was canceled. The shutdown forced Im — who plays more than anyone — into exile. He had finished third the week prior at the Arnold Palmer Invitational following his victory at the Honda Classic, climbing to 23rd in the world.

McIlroy, who moved to the No. 1 spot in the world in February, was also playing some excellent golf. The four-time major champion had tied for fifth at the Arnold Palmer Invitational. In his last seven worldwide starts, McIlroy had a victory and no finish worse than fifth.

Second-ranked Jon Rahm was also in strong form. Two victories late in 2019 were followed by five top-10s in six starts.

And then there is Brooks Koepka, No. 1 at the start of the year but unable to get much going in the aftermath of a knee injury that kept him out for three months. Koepka has not finished among the top 15 in five starts, so this long break has probably done him some good.

He won’t be at Colonial, and it is anybody’s guess as to when he will return to competition. Next week’s event at Hilton Head makes a lot of sense, but it is possible Woods waits to make his return at the Memorial Tournament next month. Less was always going to be more for Woods at this point, and the schedule potentially gets quite hectic for him later in the year.

Woods has played just twice this year, his last tournament a lackluster last-place finish at the Genesis Invitational where he shot a final-round 77 and complained of back stiffness. He did not enter three tournaments he might have been expected to play, including the Players Championship, leading to all kinds of conjecture about his back and his fitness.

But Woods said he’d have been ready to go for the Masters, which has been postponed until November. And he looked good two weeks ago at the The Match: Champions for Charity, where he didn’t miss a fairway while playing with Peyton Manning against Phil Mickelson and Tom Brady. It was just one round in a charity event, but it was promising.

Does Woods really want to wait another month to tee it up for real?

The pandemic has given some of the games big names a time to reset. As hard as it remains to believe, three-time major champion Jordan Spieth has fallen out of the top 50 to 56th. Jason Day, a former No. 1, is 51st. Phil Mickelson has missed four cuts in six worldwide events in 2020 — he also has two third-place finishes — and has dropped to 63rd in the world.

The Charles Schwab Challenge is the first of five events planned to be played without spectators. That edict could go longer depending on circumstances. The John Deere Classic was scheduled to be the first event with spectators (July 9-12), but announced it would be taking this year off and has been replaced by another tournament in Columbus, Ohio. It will be played at Muirfield Village, the same venue that a week later will host the Memorial Tournament.

One major championship, The Open, has been lost for this year, as the R&A elected to cancel the tournament. Three majors remain — the PGA Championship first, the U.S. Open next and the Masters last. For the PGA (Aug. 3-6), a decision looms soon as to whether it will be played without spectators and even if it will be held at Harding Park in San Francisco, or a backup venue.

Just two weeks later, the U.S. Open is scheduled, with the Ryder Cup to follow a week later, with a monumental decision on whether to proceed without spectators looming. The Masters is scheduled for Nov. 12-15.

The PGA Tour’s “Health & Safety” plan continues to evolve and is likely to see more changes as the circuit progresses through the schedule.

For now, here is how testing will work:

Players are “encouraged” to take an at-home COVID-19 test that is returned to a lab prior to departure. The test is not required, but taking it assures various financial incentives should a player or caddie test positive on site and be required to quarantine.

All players and caddies, as well as some tournament staff, PGA Tour staff and club workers, will be tested on the Monday or Tuesday of tournament weeks. After initially saying the hope was to have results within 24 to 48 hours, the tour announced last week that it has contracted with a company that will have mobile testing capacity with results available in a matter of hours.

It will be on site from Saturday through Thursday each week before departing to the next tournament location.

Players are allowed to practice until the results are known, but any positive tests will require the player to withdraw, and various contact-tracing efforts will ensue. The tour will not announce positive tests publicly, due to medical privacy laws.

The tour also required players to begin self-screening seven days prior to traveling to an event, and that will continue at tournaments with daily questionnaires and temperature checks. A player who tests positive on-site will be required to withdraw.

The tour has arranged for charter flights between tournaments and is encouraging players and caddies to use this mode of travel — although there is not enough space for everyone. Those who take the charter from Fort Worth to Hilton Head, South Carolina for the RBC Heritage will be required to take a COVID-19 test on Saturday and will not be permitted to travel if they test positive.

PGA Tour players will pay $600 while caddies and Korn Ferry Tour players are being charged $300. Players and caddies have first priority. There will be subsequent charters to other tour events with the same protocols in place.

In each tournament city, the tour is arranging for central hotel locations to keep players, caddies and officials within “a bubble” to try and best assure they do not contract COVID-19 or spread it. But staying at these hotels is not required, just recommended.

There won’t be any at the first five events. But that doesn’t mean there will not be people on site. Including players and caddies, the tour said it expects up to 1,100 people to be at a tournament venue to help organize and run the event. That includes a limited number of television personnel and media. ShotLink volunteers will still be utilized to record every players’ shots and putts in order to keep proper statistical information. Also, there will be staff on site for the various clubs hosting the events, as well as PGA Tour personnel, including rules officials. A small number of volunteers are still needed as walking scorers.

When will spectators return? The Memorial announced that it will have a limited number of spectators for the July 16-19 tournament after Gov. Mike DeWine lifted restrictions over large gatherings. The tournament said it would be announcing a detailed plan regarding protocols and limitations in the coming days. Tournament director Dan Sullivan had already floated plans to use tracking devices as part of a tournament badge to be able to monitor spectator clusters and enforce distancing policies. At the time, Sullivan said there would be no grandstands or hospitality venues. The Memorial is the sixth event on the revised schedule.

Sean Foley on How to Get the Correct Backswing Sequence | Golf Lessons | Golf Digest
Phil among 11 from LIV to file suit vs. PGA Tour
Golf Swing – Improve Your Pitching Distance Control
PGA Tour wins first legal battle against LIV Golf as players are denied restraining order, kept out of FedEx Cup Playoffs
My BEGINNER GOLFER Wife Learns The BASICS FROM A TOUR COACH!?