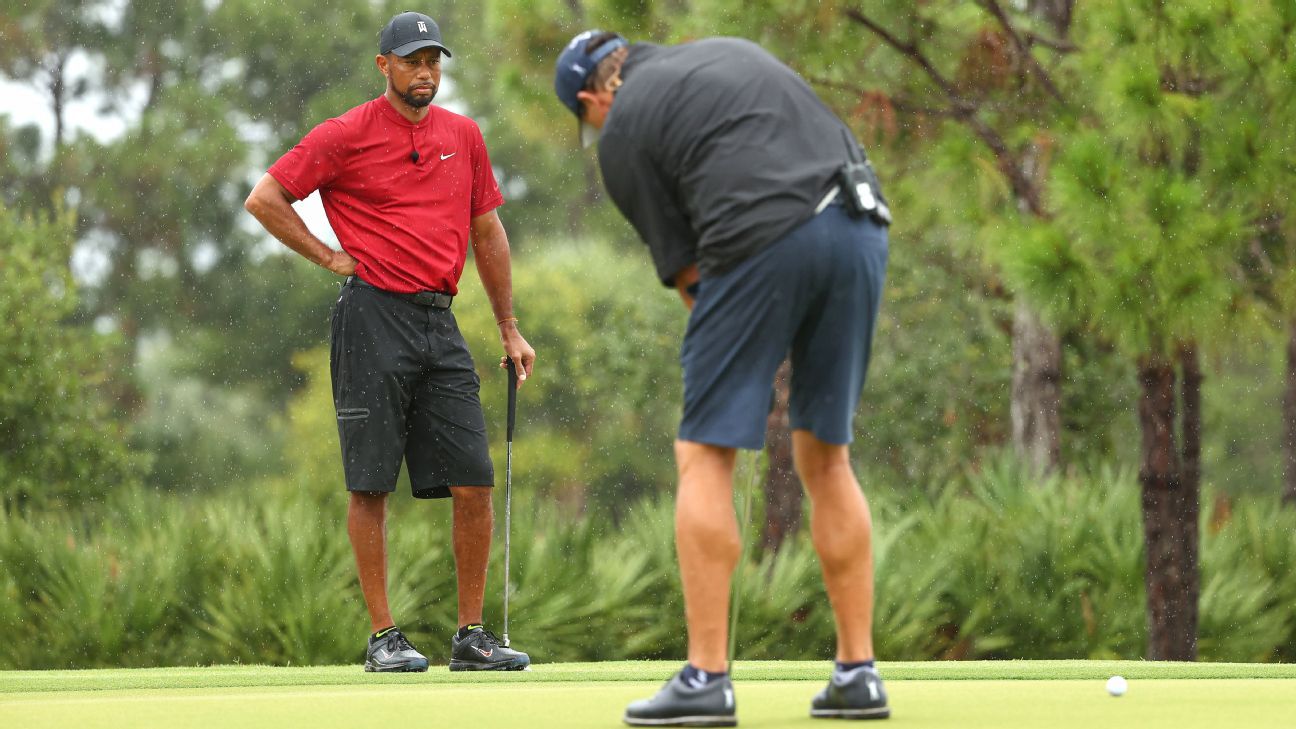 As nearly 5.8 million people tuned in to watch The Match between Phil Mickelson and Tom Brady against Tiger Woods and Peyton Manning, Mickelson confidently strolled up to the first tee and gave everyone at home a glimpse of what they were hoping to see — his calves.

The man who has joked on social media about having calves like Adonis finally got the opportunity to show them off to the world in tournament play. Mickelson played his round in a pair of dark-colored shorts, just above the knee fold, perfectly putting his calves on display with each weight transfer and rotation in his swing.

Both he and Woods sauntered around the wet course in shorts, with Woods opting for a hybrid cargo short of sorts. Woods is among the very elite dads who can pull off the golf cargo short, but there he and Mickelson were, bearing their legs, playing competitive golf on national television with a record number of viewers watching.

It might have looked foreign at first to see tour pros on television in shorts, but after a few holes it led to many asking the same question. Why aren’t they allowed to wear shorts during competition on the PGA Tour?

The Tour’s policy says players must wear pants in competitive rounds. The Tour altered that policy in 2019, allowing tour pros to wear shorts in non-competitive rounds, which meant practice and pro-am rounds as long as the shorts are knee-length, tailored and neat in appearance.

Your friend who rolls out of bed at 6:45 in the morning for his 7 a.m. tee time on your annual buddy trip would have a tough time following that, but the tour pros are fitted with high-end gear from major brands and are fully capable of still appearing as high-end golfers if they were wearing shorts instead of pants, as Mickelson and Woods both demonstrated in their match.

The PGA Tour started allowing caddies to wear shorts only in 1999, and even that was brought on with some grumbling. ESPN’s Bob Harig recalled an event called the Showdown at Sherwood on August 2, 1999, with Woods and David Duval.

It, too, was a made-for-TV match and was highly anticipated, with two of the best golfers in the world who had created somewhat of a rivalry. At that time, caddies were still not allowed to wear shorts, and the temperature was around 91 degrees for the match.

Steve Williams and Mitch Knox, caddies for Woods and Duval, showed up to the event wearing shorts, Harig remembered. Rules official Vaughn Moise told the caddies they needed to be in pants, so Knox went to the pro shop at Sherwood and bought a pair of pants with no hems that he rolled up near his ankles.

Moise warned Williams again that he needed to be wearing long pants or he would not be caddying on the PGA Tour.

Woods then stepped in and said, “Guess I’ll be playing in Europe,” and Williams wore his shorts during the event.

Golf is traditionally traditional, so some rules are just followed, but some rules are head-scratchers. Such as how 20-to-50-year-old men have to wear pants while outside in warm climates playing a sport that takes five hours.

Not everyone would want to switch, but why not give them the option to choose?

Charley Hoffman is the chairman of the Player Advisory Committee, helping to make recommendations to the board of directors, and is among those tour players who wouldn’t want to wear shorts.

“As much as I like to wear shorts being a Southern California kid, I just think the product looks a lot better, a lot more clean [with pants],” Hoffman said. “Not sure if that is the older side of me. I don’t mind shorts, but I tend to believe it’s more of a professional look with pants.”

There’s nothing wrong with that take. He’s the athlete and should get to wear what makes him feel comfortable and what he believes looks best.

There are players, however, who think they would be more comfortable in shorts. Brandt Snedeker thinks the idea of having the option to choose would be beneficial and that playing in shorts in the pro-ams and practice rounds has already softened viewers and fans up to the idea.

“It seems like our society is getting more and more casual it seems like every day. Some traditionalists would want to see us in pants more often, but when you get into the middle of summertime, like you’re going to see in the next few months on Tour, it’s going to be hot everywhere,” Snedeker said. “Every pro would probably be for it. It’s going to be 100 degrees in Memphis in July. The shock-ness of people seeing us in shorts is wearing off, and they are getting more comfortable with it.”

It should be about comfort for the athletes, because that’s what the modern golfer is, an athlete.

Adidas is the market leader in shorts and pants in golf retail, and its director of global apparel, Shaun Madigan, sees positives in allowing shorts. At the same time, Madigan said technology in pants has come so far that we’re not comparing wearing shorts to pleated cotton potato sacks sewn as pants anymore.

“In my opinion, the biggest difference would come from the athletes’ point of view,” Madigan said. “From the conversations I have been exposed to, it appears as though a majority of [tour golfers] would appreciate the option to wear shorts during tournament rounds.”

It would benefit the apparel companies, too, as the tour pros are major drivers for their brands and influencers for the styles many consumers and average golfers select.

There haven’t been many other golfers to influence style in recent years than Rickie Fowler and Puma. Fowler can be seen at tournaments surrounded by young kids in bright orange hats and colorful PUMA outfits similar to what Fowler wore early in his career.

Grant Knudson, global head of product for Puma Golf, said consumers’ purchasing habits in the United States are about 2-to-1 when it comes to buying shorts versus pants. The average golfer is opting for shorts when it’s hot out because it’s more comfortable despite the advances in technology with golf pants.

Allowing the golfers to wear shorts would open up opportunities for apparel companies to play around more with styles, clothing scripts for players and designs that could help influence the average golfer and improve sales on the back end.

“There are several examples, whether it was Rickie wearing high tops and joggers for the first time, when he wore an untucked shirt, when he wore the pineapple shirt and matching shorts,” Knudson said. “Bryson and his driver cap, Gary Woodland and his U.S. Open shoes, we definitely see a big uptick, and you can really quantify their impact. It definitely drives style trends, especially a guy like Rickie where a lot of younger kids follow him, and there’s a new crew on tour that is younger, looking for cool things to wear to exemplify their style.”

Knudson even believes it could have an impact on the shoe market as some of the more modern styles of golf shoes look better with shorts than pants. Being able to show off your shoe game has become a new trend, and wearing shorts would only give golfers a better opportunity to do that.

“Part of the reason joggers happened was so people could show off their shoes,” Knudson said. “It’s definitely something, just in streetwear, it was a reason for tighter pants around the ankle, showing off the shoe game.”

Shoe game or not, the Tour is not going to allow shorts any time soon, and there have been no discussions to do so. But judging by the tour pros who take advantage of the option in the practice rounds and given the impact it could have on the retail side, it seems like maybe it should be a conversation.

For now, unfortunately, if you want to see Mickelson’s calves or any other tour pro flaunting the newest style of shorts, you’ll have to see it on social media or during a practice round.

Maybe the Tour sees Mickelson’s calves as an unfair advantage, something that would be distracting to other players. Who knows?

Allowing shorts wouldn’t be such a bad thing, though, and letting the athletes perform in attire that makes them comfortable would only help advance the game and help make it that much more relatable to its fans.

“I think as people are realizing, these golfers are athletes, they’re hitting it further than ever, and you look at every other athlete and they’re in clothing that helps accentuate that,” Knudson said. “If it helps them perform and makes them feel more comfortable, that’s what they’re going to go toward, is what makes them feel comfortable and gives them confidence. If they feel like they look better, they feel better, they’ll play better.”

This Simple Move IMPROVES Every Golf Swing – You Feel Great Ball Striking INSTANTLY
Kim, 20, earns PGA card after 61 to win Wyndham
My BEGINNER GOLFER Wife Learns The BASICS FROM A TOUR COACH!?
How to watch the 2022 FedEx St. Jude Championship at TPC Southwind
63 Years later, one of golf’s most influential stories is being told on the big screen