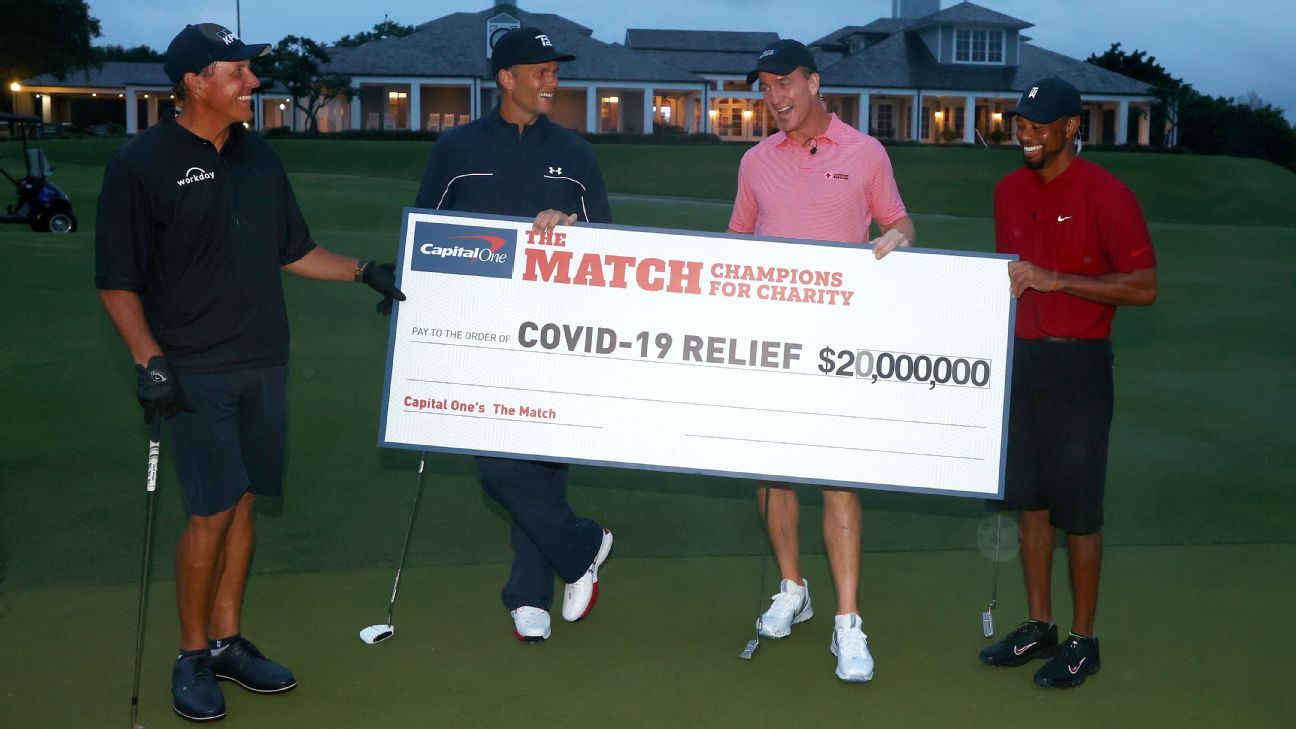 Rain filled the South Florida air on Sunday, threatening to make a mess of The Match: Champions for Charity at Medalist Golf Club.

Instead, four sporting icons didn’t let bad weather dampen what turned out to be an exciting, fun-filled exhibition that raised $20 million for COVID-19 relief efforts while highlighting the ups and downs of competitive golf.

Tiger Woods and Peyton Manning prevailed 1 up over Phil Mickelson and Tom Brady in Hobe Sound, Florida, but the outcome never really mattered.

Mickelson trash-talked, as did announcer Charles Barkley. Justin Thomas, the No. 4 player in the world, dished some dirt and offered some barbs while serving as an on-course reporter. Celebrities called in and offered challenge donations. Ultimately, after $10 million was pledged by the four players and WarnerMedia prior to the match, another $10 million was raised over the course of the afternoon via online and text donations and other pledges.

“Phil said he was nervous, so imagine us,” said Manning, the retired two-time Super Bowl-winning quarterback who is a member at Augusta National. “To go behind the ropes and get in these guys’ world and in the arena with them was really an incredible experience.

“I was not comfortable the whole time, but raising $20 million as people are going through such tough times, it’s something I’ll always remember and cherish.”

A Tiger-Phil match of some kind had long been in the works as a sequel to The Match that Mickelson won in 2018, capturing a $9 million payday in a winner-take-all Thanksgiving encounter in Las Vegas. Well before the coronavirus pandemic put a halt to sports, a Tiger-Phil match that included Manning and Brady was in the works. The concept changed to a fundraiser weeks ago while still offering a chance for fans to watch live sports.

All four players had their moments, led notably by Brady, the Tampa Bay Buccaneers quarterback who seemed to be getting grief the entire front nine before he holed a wedge shot for a birdie on the seventh hole — while his pants were splitting and his microphone was breaking. That meant a $100,000 donation from Brooks Koepka — who phoned in his pledge as he saw Brady struggling, saying he’d offer the money if the former New England Patriots quarterback were to make par on the front side.

As Brady sprayed it around the course, Woods and Manning took a 2-up lead through four holes and were 3 up through six. Although Manning made a nice birdie putt at the fourth hole, it was Woods who was the most impressive golfer. For the first time since Feb. 16, he was watched by the public while hitting golf shots, and he did not disappoint.

Woods, who is tied for the most wins in PGA Tour history with 82, did not miss a fairway on his home course and looked comfortable hitting all manner of shots.

It marked the first time he had played since he finished last among those who made the cut at the Genesis Invitational. He then skipped the WGC-Mexico Championship and the Arnold Palmer Invitational. When Woods skipped the Players Championship, saying that his stiff back was not right, there was concern about his Masters title defense.

But the pandemic shut down the PGA Tour after one round of the Players Championship, and the time away has allowed Woods to regroup.

“I feel a lot better than I did then,” he told Discovery last month. “I’ve been able to turn a negative into a positive and been able to train a lot and get my body to where I think it should be.”

Things got off to a slow start due to the poor weather, which delayed the start by some 50 minutes. But once the players got going, there was some excellent banter and good golf. All of the players were outfitted with custom golf carts, with cameras focused on their faces and microphones available for questions from the announcers.

Woods got off a good shot at Mickelson when he was told to mark his ball on a green and quipped: “Do you want me to mark it with one of my U.S. Open medals?” Woods has won the tournament three times; Mickelson, infamously, has six runner-ups in the championship but no victories.

Manning was the most talkative, and Barkley had no problem dishing out as much abuse as possible.

Mickelson hit a few wayward shots to start, but the 44-time PGA Tour winner settled down and served as a cheerleader for Brady, trying to keep him in the game. The duo rallied on the back nine as the format shifted to modified alternate shot. Mickelson bombed a tee shot onto the short par-4 11th green, and Brady holed the eagle putt to bring them to 2 down.

“This is where it changes,” Mickelson said. He missed a good chance to bring the match close at the 13th but got within one hole when Manning missed a short par putt at the 14th. They could get no closer as the players proceeded in heavy rain and near darkness.

After Woods hit his tee shot in the fairway at the 18th, with Manning knocking the approach to the front of the green, all that was left was a two-putt par for the victory.

The most impressive USGA winning streak you didn’t know about comes to an end in Alaska
Chun takes halfway lead at Women’s Open
Tom Kim’s unreal bounce back, a journeyman’s career low and gut-check time for Rickie Fowler
Day 1/6 of Walking 150 miles for Prostate Cancer UK
Rickie Fowler’s playoff rally (likely) comes up short, Tom Kim chugs toward history, and a blast from a past champ