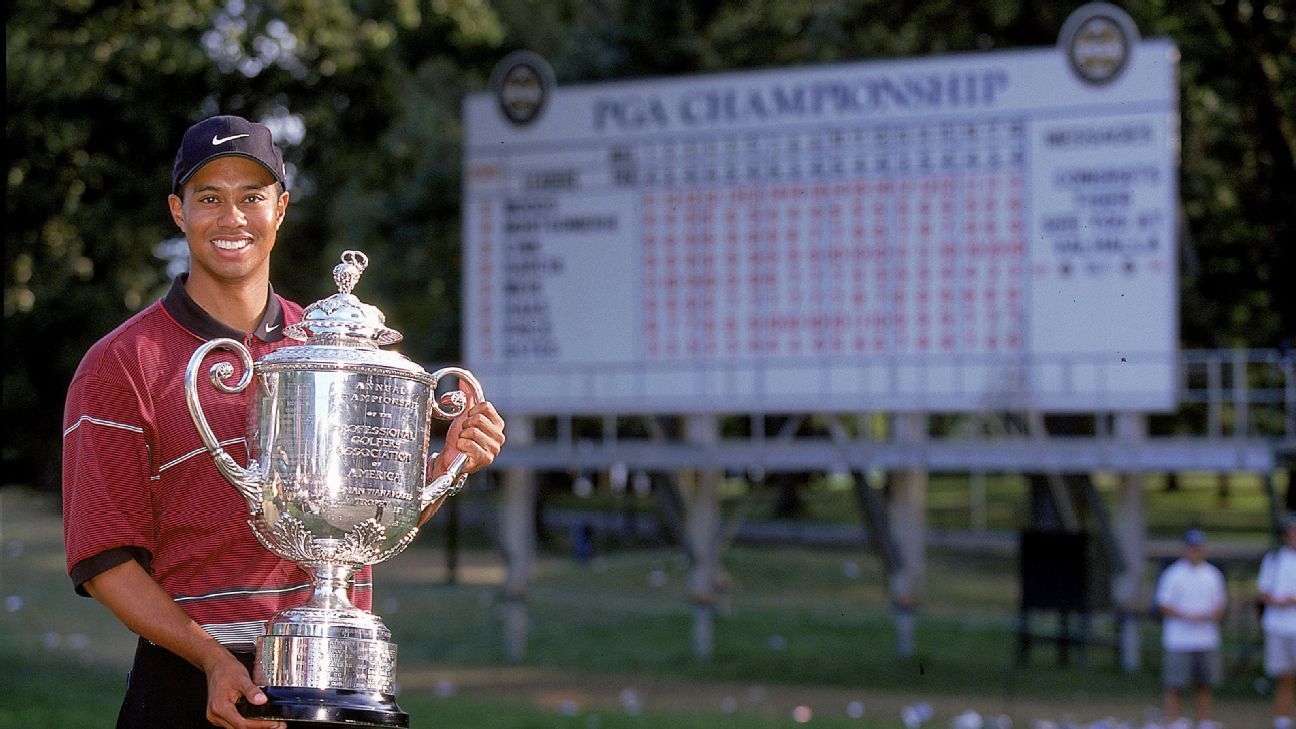 The PGA Championship at Harding Park was scheduled for this week. The coronavirus pandemic that shut down sports forced the event to be postponed until Aug. 6-9 in San Francisco.

This week, though, you can still get your golf fix, as ESPN re-airs some classic victories by Tiger Woods, Rory McIlroy, Brooks Koepka and Justin Thomas.

Here’s the lineup and what stood out from each of these memorable wins:

Thomas trailed by two at the start of the final round, which included a slew of contenders such as Patrick Reed, Louis Oosthuizen, Rickie Fowler and Francesco Molinari. A birdie by Thomas at the ninth put him in a five-way tie for the lead.

Matsuyama led alone after a birdie at the 10th but made five closing bogeys to fall out of contention. But Thomas forged ahead with birdies at the 10th and 13th — where he chipped in — and another at the 17th — giving him a three-shot cushion with a single hole to play. His final-round 68 meant a two-shot win over Molinari, Reed and Oosthuizen — who became the seventh golfer to finish runner-up in all four major championships.

The victory for Thomas came less than a month after his good buddy Jordan Spieth had won The Open at Royal Birkdale, putting him in position to capture a career Grand Slam with a victory at the PGA. But Spieth never threatened. For Thomas, it was his fifth PGA Tour title. — Bob Harig

2:30 p.m. ET on ESPN2: 2014 PGA Championship
Winner: Rory McIlroy
What stood out: McIlroy capped a remarkable summer with a second consecutive major championship victory, parring the last hole at Valhalla Golf Club in near darkness to win the PGA Championship. And it was far from easy.

The winner of The Open a few weeks earlier at Royal Liverpool, McIlroy had also won the previous week’s WGC-Bridgestone Invitational. He took a one-shot lead into the final round, but that was quickly gone after a couple of early bogeys. In pursuit were the likes of Rickie Fowler, Phil Mickelson and Henrik Stenson.

At one point, McIlroy trailed by three shots, but it was a stout second shot at the par-5 10th that changed everything. The shot set up an eagle, bringing McIlroy within one stroke of the lead. And while Fowler and Stenson bogeyed the 14th hole and Mickelson bogeyed the 16th, McIlroy added two more birdies and finished with a 68.

Mickelson, despite making six birdies in his round, came up one shot short, his chip for eagle at the 18th barely missing. McIlroy became the first player since Tiger Woods in 2008 to win three consecutive starts and the first since Padraig Harrington, who also won The Open and PGA in 2008, to win consecutive major championships. — Harig

7 p.m. ET on ESPN2: 1999 PGA Championship
Winner: Tiger Woods
What stood out: Woods’ second major championship title came with as much relief as joy. Even with five top-10s in majors since his first victory, the glow of the 12-shot 1997 Masters win had dimmed. Woods felt considerable pressure to add another major, and this offered his best chance, as he held a share of the 54-hole lead with Mike Weir.

And it wasn’t easy, as Woods nearly let a five-shot lead slip over the closing holes, playing a 5-hole stretch in 4 over as a hard-charging Sergio Garcia tried to steal the title. Garcia, 19 and playing in just his second major championship as a pro, had stared back at Woods from the 13th green after draining a birdie putt to pull closer, and the game was on. That Woods then followed with a double bogey made the tension even greater.

Later, Garcia hit a memorable, eyes-closed shot from behind a tree at Medinah’s 16th hole to help stay close with a par and forced Woods to sweat out a victory, including an 8-footer for par at the 17th hole. Garcia had birdie chances on the last two holes that he was unable to convert.

Woods, with a final-round 72, at age 23, became the youngest player since Seve Ballesteros to win two majors as he held off Garcia by a shot. — Harig

9:30 p.m. ET on ESPN2: 2019 PGA Championship
Winner: Brooks Koepka
What stood out: For the first time in decades, the PGA Championship was contested in a new slot, as the second major championship, five weeks after the Masters. And as part of the PGA Tour’s revamped schedule, the tournament saw some difficult conditions at the already brutal Bethpage Black on Long Island.

None of that seemed to slow down Brooks Koepka, who played the first two rounds with reigning Masters champion Tiger Woods, who was no match this time — missing the cut by a shot. Meanwhile, the defending PGA champ opened 63-65 to set the tournament 36-hole record, as well as the largest lead — seven strokes — halfway through the tournament.

Koepka cooled off in the third round, shooting 72 to still lead by seven strokes. Dustin Johnson made a late charge, at one point pulling within a single stroke over the closing holes, but Koepka was able to hold off him to win by two despite a final-round 74.

He was able to become the first player to successfully defend two major titles, as he had also done so in 2018 at the U.S. Open. It was Koepka’s fourth major title, and he would go on to finish runner-up at the U.S. Open and tied for fourth at The Open to finish among the top four in all of the majors. — Harig

Get into golf with The PGA and Find a Golf Lesson!
Here’s the prize money payout for each golfer at the 2022 FedEx St. Jude Championship
I was SO close to a hole in one on camera! #Break75 S2E7
Golf Lesson w/ Cortland: STABLE Impact And Exit With A Stronger Grip
Don’t Turn Your Shoulders In Your Golf Swing